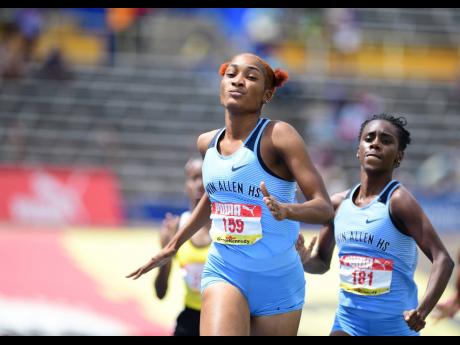 Edwin Allen teammates Rushana Dwyer (left) and Jessica McLean competing in the Class One 800m final at the ISSA/GraceKennedy Boys and Girls’ Athletics Championships at the National Stadium in Kingston earlier this year. 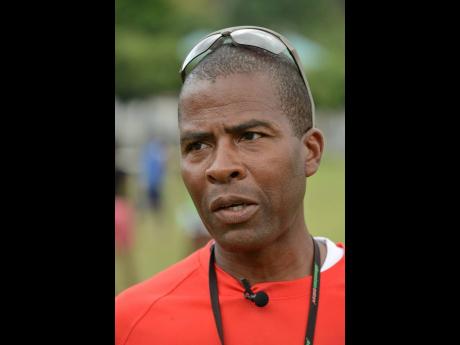 When Rushana Dwyer and Jessica McLean compete at this week's National Championship, it will be the last of their many middle distance races in the famous sky blue of Edwin Allen High School. Dwyer and McLean helped to cement the growing Edwin Allen Girls' Championships dynasty but with the high school years at an end, they are set for new horizons.

"They would have had a very successful Champs career and you know we're truly going to miss them because they have been two good soldiers to us over the years. They have always been delivering and you know the fact that the time has come for us to say goodbye, we just have to part but we are hoping that we will find other girls that will, you know, follow in their footsteps," he said.

Together they amassed 115 points at Champs, with Dwyer scoring 66 and McLean 49. Fittingly, their last Champs contest, the Class One 800 metres, ended with them going one-two with Dwyer completing her collection of two lap titles in Class One, Two and Three.

In addition, they contributed mightily to Edwin Allen's domination of the 4x800m relay at home and abroad. With Dwyer and McLean on duty, Edwin Allen were near on unbeatable at the Gibson Relays and the Western Relays in Jamaica and the pair spurred sky blue success in 2019 and 2021. Individually, Dwyer won six gold medals at Boys and Girls' Championships, four in the 800m and two in the 1500 metres. For her part, McLean won two silver and four bronze medals during a sojourn interrupted in 2020 by the COVID-19 pandemic.

Dyke also hopes that they will one day continue the fine work done by Natoya Goule in the 800m on the world stage. "I am hoping that," he said. "One of the things that I did is ensure that Jessica will be going pretty close to Natoya. She will be going to Clemson where Natoya is working with Jamaican coach Mark Elliott so, hopefully, she'll get a chance before Goule decides to hang up her spikes to spend some time with her. Hopefully, she can benefit from that," he said.

At the time of this interview, a final decision on the US collegiate destination for Dwyer hadn't been made.

Both of the departing Edwin Allen seniors will run tomorrow, Dwyer in the under-20 girls' 800m and McLean with the women's field which is headed by Goule.