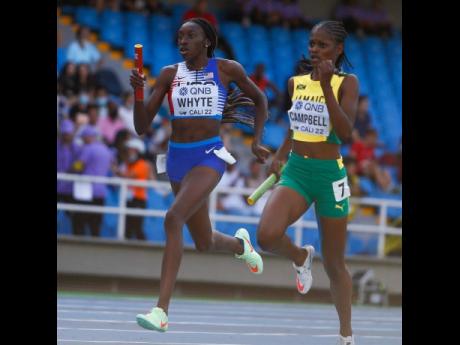 Jamaica’s Abigail Campbell (right) chases the United States’ Madison Whyte on the third leg of a 4x400 metres mixed relay heat on day one of the World Athletics U20 Championships in Cali, Colombia, on Monday. 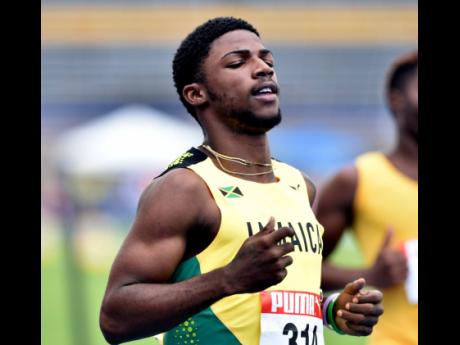 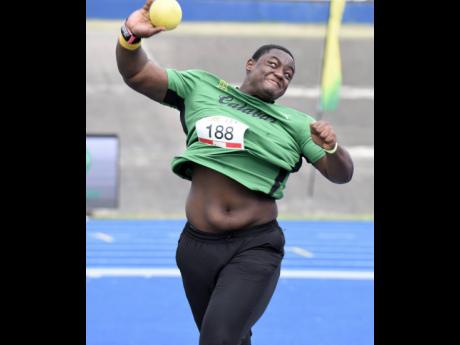 Yesterday was one of the best days in the life of young Jamaican sprinter Bouwahjgie Nkrumie.

The 18-year-old first equalled the National Junior 100 metres record in winning his semi-final in 10.11 seconds before breaking that mark with a 10.02 run to earn Jamaica's first silver medal at the 2022 World Under-20 Championships in Cali, Colombia.

An overjoyed Nkrumie told STAR Sports that winning silver and breaking the record is 'a great accomplishment'.

'"It is a very good feeling to represent your country as it is always a privilege and to get a medal it is a great accomplishment for me after an up-and-down season. I want to dedicate this to my friends and members of my family who who have always supported me," said Nkrumie who stated that seeing his teammate Sandrey Davison pulling up minutes before he took to the track for his semi-final affected him mentally but that gave him an extra drive to do well.

Jamaica earned two other medals to bring their tally at the championships to three. Thrower Kobe Lawrence had a personal best 20.58 metres for silver in the men's shot put while the Mixed Relay 4x400 metres team of Jasuana Dennis, Abigail Campbell, Malachi Johnson and Aaliyah Baker picked up bronze in finishing third in 3:19.98.

Nkrumie gave more than a hint of his fine form when he equalled the national record jointly held by Yohan Blake and Christopher Taylor in his semi-final,then in the final he was off to his usual fast start but the brilliant Letsile Tebogo of Botswana romped to victory in a Championship and World Under- 20 record 9.91. Benjamin Richardson of South Africa finished third in 10.12.

Clayton coasted to an easy win in 11.38 seconds, the sixth fastest time going into the semi-finals. "For me today was just to get a good start and execute properly. I am not worried about anything going forward as the objective is to just stay focused and deliver," Clayton said when asked about Nigeria's Tima Seikeseye Godbless who won her heat in a national record 11.09 to advance as the fastest qualifier.

Cole won her heat in 11.39 to advance with the seventh fastest time.

"The race was OK as I followed the instructions from my coach. He told me to get out to the lead and if there was no threat, ease down at the end," Cole said.

N'ketia Seedo of the Netherlands also posted a national record after winning her heat in 11.16 to be second fastest overall.

The semi-finals are slated for today at 3:05 p.m. with the final down to take place at 6:35 p.m. Clayton will go up against Seedo in semi-final two while in the third semi-final, Cole will face Godbless.

Jamaica's men and women are also through to today's semi-finals of the 400 metres. Top ranked Dejanea Oakley looked easy in winning her heat in 53.70 seconds to qualify third overall. Her teammate Rickianna Russell took fifth in her heat in 54.63 to qualify on time.

In the women's 400m hurdles only Oneika McAnnuff advanced to the next round after finishing third in her heat in 59.45 to be the 16th fastest qualifier. Safhia Hinds could only manage sixth in her heat in 1:00.97 and was eliminated. The semi-finals are down for 3:05 p.m. today and McAnuff will run out of lane eight in semi-final three.

Sprint hurdler Demario Prince will contest the men's 110 metres hurdles final today at 6:25 p.m. He placed second in his semi-final heat with a personal best 13.58 seconds to be the fifth fastest entering the final. Dishaun Lamb failed to advance after a fourth-place finish in his semi-final in 13.76.