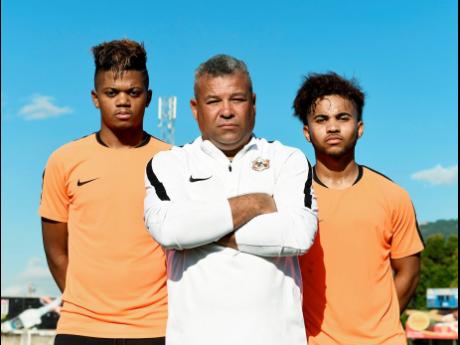 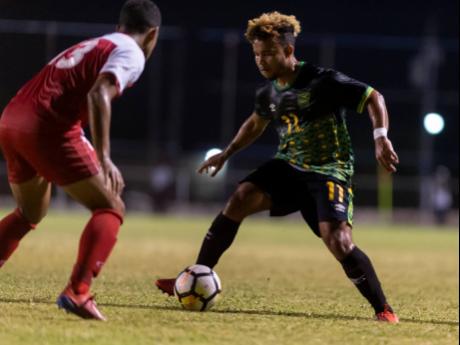 Jamaica’s Kyle Butler takes on Ezrick Nicholls of St Kitts and Nevis in the Olympic qualifier at the Anthony Spaulding Sports Complex in 2019, while he was still active.
1
2

Kyle Butler is not ruling out playing in the Jamaica Premier League (JPL) since mending fences with agent and manager, Craig Butler, his father, after an altercation and the much-published court case.

The 24-year-old Kyle, who during that tumultuous period had drifted away from football and launched a career as a music producer, is looking to reignite his playing career as he has refocused his dream of playing in Europe.

"I would play in the (Jamaica) premier league, yes. Once the opportunity is there but it is all up to the big man. My father is my agent and my manager, so whatever he says that is what I will do," he stated.

The 24-year-old was out of training for two years and is working to improve his physical condition before analysing the best available options.

"Football is in my blood and it makes no sense to throw it away like that. First thing I need to do is getting back into physical shape and see what happens from there. The focus is also to enjoy what I'm doing, but I am back in training again so let's see what happens in a year," he said.

The attacking midfielder, who is also the CEO of Dynasty Records, will, however, still involve himself in the music industry.

"I haven't given up on that. I am grounded and managing my time very well. We have produced many hits in the last two years and doing extremely well.

"Dynasty Records is a well established brand in the music industry. We have worked with many artistes so it is just to take it to the international level now.

"I am really proud of what we have done and achieved in such a short space of time and we are just taking it to the next level," he insisted.

Kyle joined forces with the elder Butler on the coaching staff of Mona High and so far they have created waves in this season's Manning Cup with Mona winning all six matches to lead Group E with 18 points, six more than second-place Wolmer's Boys' School.

He noted that they have put their differences behind them and he wants to play a role in building the legacy of Phoenix Academy, which was his foundation as well as that of Leon Bailey from English Premier League outfit Aston Villa.

"It is family over everything. That is number one. Even though we had problems in the past we have to look at life and remember that family sticks together.

"Phoenix and Mona High are legacies and I have to ensure they live on. I have known all the players since they were young, so it is like coming back into a family fold and helping and adding my experience and knowledge to help them develop their careers as footballers," Kyle said.

Coaching is not new to Kyle, but he is thoroughly enjoying imparting his knowledge to young players.

"When we first came back from Europe, Leon and I were coaching and sharing the knowledge from Europe to our academy, so the younger players could play with a certain level of confidence and skill set," Kyle said.

"It is not new but it is also helping me develop my coaching skills and I am learning, but there's nothing better than showing the kids what to do and they go on the field and execute. It is a tremendous feeling and only coaches will understand that, so I am happy I can be a part of this.

"I love coaching and I love helping youths, I do that in the music as well, so I guess that is just part of me," he said.