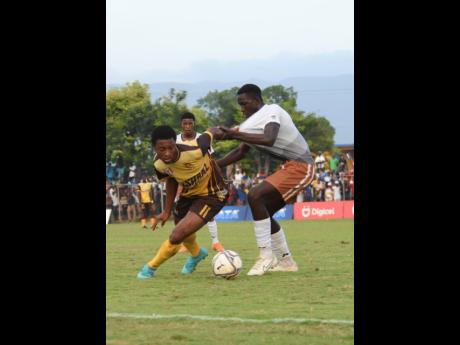 Manchester High’s Yarek Carnegie turns on Central High’s Anrick Gordon during the ISSA/Digicel daCosta Cup semifinal match at St Elizabeth Technical High School (STETHS) yesterday. Central won 5-4 on penalties after both teams had battled to a 1-1 scoreline at the end of regulation time.

The fairytale season for Central High continues as they booked a historic place in the final of the ISSA/Digicel daCosta Cup football competition with a 5-4 penalty shootout win over Manchester High after a 1-1 regulation time result, in the semi-finals at St Elizabeth Technical High School (STETHS) yesterday.

Dylan Clarke gave Central the lead against the run of play in the 24th minute. Yaneek Carnegie won a penalty for Manchester with seven minutes remaining in the first half, but his spot kick was saved by goalkeeper Leon Ricketts.

Manchester, who trailed going into the second half, came out purposeful, but it took 10 minutes for Nickoy Bartley to pull the game level from the penalty spot.

Both teams started the penalty shootout strong with three consecutive goals although Manchester's third kick from Shaquiel Campbell caught a big right hand from goalkeeper Ricketts, on the way in. On their very next kick, Manchester's Seijii Ashman fired over the crossbar.

With both teams converting four penalties a piece Manchester's goalkeeper Shamar Cammock came up big to deny Emory Ayton the glory of the game-winning penalty. His teammate Tyrese Douglas provided little support for his keeper after his kick was saved.

Captain Clarke came up big once more for Central netting the final-sealing kick to be showered in all the glory from his teammates, coaches, and fans.

Coach of Central, Jermain Douglas, is elated they were able to exceed expectations once more as they reach the final of the competition for the first time in history.

"We have gone into all our games this season as underdogs. We have been rising above and exceeding expectations as a school," said Douglas, who also heaped praise on his captain.

"The captain has been doing well for us all season. He has played as a centre-half, central midfielder and centre forward so has been doing a mammoth task for the team. I was a bit disappointed that when the final penalty in the first round of five what's to be kicked, he did not step up and take responsibility.

"However, in the end, he took the most important kick that send us into the final so kudos to him," Douglas stated.

A disappointed Johnoy Chambers, coach of Manchester, was lost for words after the defeat.

"Honestly, disappointment is an understatement. We just did not take our chances because I believe we played excellent, especially in the second half.

"That's football for you. If you don't take your chances stuff like this happens. It is a bitter pill to swallow and it is hard to find words after such a difficult one," Chambers said.

It will be an all-Clarendon final after Clarendon College defeated Manning's School 5-4 on penalties after a 1-1 stalemate in regulation time. Jhamaleek Porter gave Manning's the lead in the 15th minute before CC's Kaheem Dixon pulled the game level in the 52nd minute.