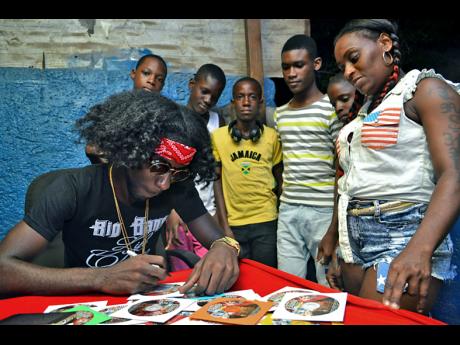 Fast-rising dancehall artiste Big Bang, aka YoungWildApache, showed appreciation to some of his fans by signing autographs and issuing CDs of his mix tape, 'Life Change' at Affiliates Records headquarters in Cockburn Pen, St Andrew, recently.

Songs on the mix tape have been getting some attention in the dancehall. These include Nuh Fi Bite (featuring Diligent), Shot A Spray (Burru Banton remix), Cyaah Escape, Life Goes On, and No Coke Zone, among others.

The mix tape features 20 songs mainly from the dancehall and reggae genres. The mix tape was officially launched on Night Fix, an internet radio station, in September, and some of the songs are being featured on radio stations locally and abroad.

Big Bang said he appreciated the support that his fans had given him.

"They can expect more from me in the future, as I am still busy working on new materials in the studio," he said.

Fans can find the mix tape on YouTube, and can also download for free on yardhype.com, fimimp3.com and on his soundcloud @youngwildapache.