Adahzeh - the all female band from Jamaica 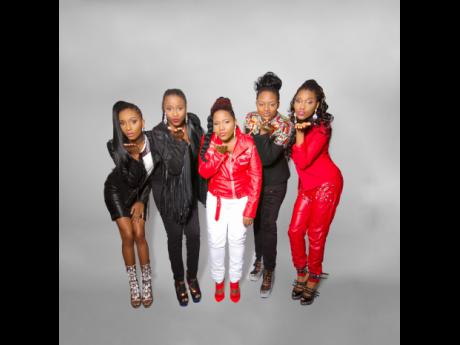 The crowd is building as the music pumps at a fashion show inside downtown Kingston clothing store Sabritru. Next to the models strutting down the runway are five young women. They are very much part of the fashion show, but they are not modelling.

In fact, they are the source of the melody guiding the show. They all move to the music, especially the lead singer, who struts her stuff alongside the models while belting out a tune.

She pauses singing briefly to announce, "We are Adahzeh, the all-female band from Jamaica!" After advising the crowd where they could find the band on social media - 'Adahzeh' on Facebook and Instagram and '@Adahzehmusic' on Twitter - Kadian (the lead singer) rallies the band to resume the very catchy chorus of their latest single, Girls Like We. The song has been getting some rotation on major local stations and is now available on iTunes. The song, produced by the legendary Danny Browne, is edgy and features dancehall diva Tifa on the track.

Adahzeh - which means 'The King's daughtaz' (The origin is African) - is a five-member outfit comprising lead singer Kadian, Chevanese (bass guitar), Karissa (keyboard), Tashana (drums) and Tara-Dean (guitar). The all-female band is unique in its offerings.

Adahzeh is not your average all-female band. While they are undoubtedly pretty faces, observing one of their live performances or watching one of their videos on YouTube is all it takes to realise that they are so much more.

Girls Like We has been considered by many as a nod to female empowerment. The track encourages independence. Unlike many female-empowerment anthems, Adahzeh steps off the beaten track, committing to standing behind a partner who needs help: "girls like we hard working, and if wi man need help wi a go be di one." Already, they have been getting their name out there and promoting the single, making the rounds on radio and television with appearances on Smile Jamaica, E-Prime, Mellow Morning Live Tuesdays (Kool 97 FM), Rise and Blaze with Nikki Z (Fame FM), and Full House Fridays (Fame FM), to name a few.

Their performance at Sabritru was just one of many. They have performed at Live at the Clock in Half-Way-Tree (Mandela Park); the Carreras Scholarship Awards at the Jamaica Pegasus; and most recently, the Evening of Culture at the Garden Theatre (St Andrew High School), where they wowed patrons alongside the likes of Heather Cummings, Queen Ifrica, and Tony Rebel. And they're only just beginning.