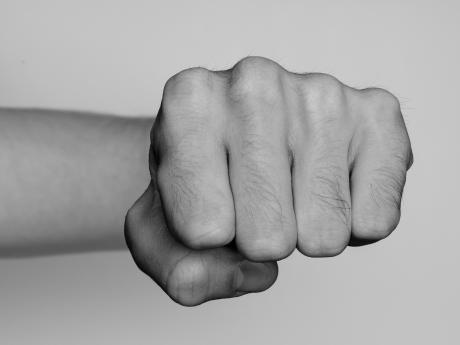 A woman, who screamed, "no!", when Resident Magistrate Judith Pusey said she was sending her boyfriend to prison for three months because he had a

ssaulted her, was relieved when the judge fined him $20,000 instead.

Charged with assault is Patrick James.

In his previous appearance on Monday, he pleaded guilty to the offence and was remanded in custody until Wednesday.

When the matter was called up, James told the court he loves the complainant and wanted to marry her.

The complainant admitted they were still an item.

The court heard that, during a dispute, James hit the complainant.

The court was also told the complainant, who has a larger frame, had to sit on James, the smaller of the two, in order to prevent further assault.

The complainant told the court she had forgiven James. "Mi just want you tell him to stop beat me up," she told the judge.

RM Pusey said, "You need to leave his house. Well, I am going to ensure that you don't touch her, three months imprisonment?"

The complainant screamed, "No, please, your honour."

James in his defence said, "Your honour, a she bail me, enuh, so I don't know."

A fingerprint order was also made against him.