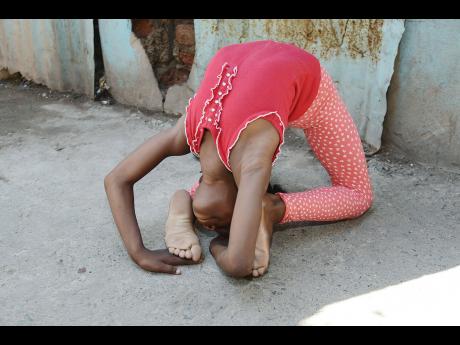 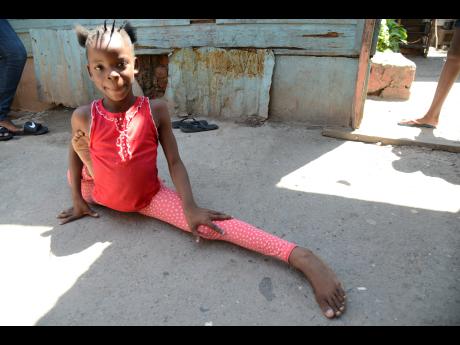 McKayla's talent has long been a source of amusement for persons in Denham Town, Kingston.
1
2

Young McKayla McKenzie, the super flexible eight-year-old from Denham Town in Kingston, has received a full scholarship to train at the Jamaica School of Gymnastics, from which she can matriculate to represent the island in competitions.

The St Albans Primary third-grader, who was featured in THE STAR last Friday, captured the attention of thousands of people with her natural acrobatic talent. Among those who were wowed by her abilities was president of the Jamaica Amateur Gymnastics Association, Nicole Grant-Brown, who reached out to the family after seeing the article.

"I told her mother [Shanique Samuels] that what I'm seeing her daughter doing is more contortionist, but she is very flexible and could do very well in gymnastics if she gets the right technical training. So I asked her if her daughter would be interested, and she said she would talk to her and call me back. She called back an hour later and said she was interested, so I offered her a full scholarship for a year, where she can start training on Saturdays," Grant-Brown shared, adding that they will continue to sponsor McKayla if she does well in the classes.

An elated Samuels told THE STAR that she was brought to tears by the outpouring of love and admiration for her daughter's talent since the article was published. She said they are both excited and grateful for the opportunity that Grant-Brown has given McKayla.

"Me feel good about it because she has the gift, and her dream is to be a dancer. Me feel proud about that. I read all of the comments on the story, and me feel real proud. It bring tears to me eye, to be honest," Samuels said.

Last Friday, THE STAR highlighted the young contortionist, who said her talents came naturally and that she hopes to become a professional dancer. However, her mother had explained that they did not have such facilities in their community.

If all goes according to plan, McKayla will start her lessons on Saturday.