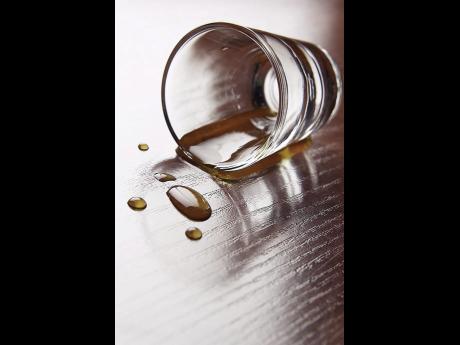 A Kingston teacher has been fired from his job after he reportedly pulled a knife at two students who called him  'Rum Head'.

The teacher, who admitted to being a former alcoholic, has since written to the Ministry of Education asking to be reinstated.

The decision to fire the teacher came after the vice-principal met him exiting a bar close to the school during class hours.

To compound the matter, the teacher was supposed to have been answering to the knife allegations that day.

The vice-principal, in a letter to the teacher, said that when he attempted to speak with him after seeing him exiting the bar, he "exhibited signs of intoxication and heavy alcoholic odour emanating from your (his) breath."

The teacher was also told in the letter: "I recommend that you seek medical advice to help with your presumed weaknesses which affect your ability to control your classes as well as command the respect of your students."

Regarding the knife accusations, it is alleged that the teacher objected to being called a rum head by two girls.

He reportedly pulled a knife and allegedly called the students "gal" and "dunces".

It is further alleged that he threatened to spit on the students. The incident was reportedly witnessed by a teacher.

The teacher told THE WEEKEND STAR that the allegations against him are false, and said that he did not get an opportunity to clear his name.

“Nothing nah go suh and no investigation was done. Nobody contacted me to ask anything. No meeting was held with the principal, no student and no report is at the police station against me,” he said.

However, the vice-principal said the teacher was told in the letter to report to his office on June 14 at 10:30 a.m. to address the knife allegations.

The teacher reportedly did not show until 10:55 a.m. and when the meeting was rescheduled for 11:20 a.m. that day, the teacher allegedly failed to attend.

But the teacher, who said he has given 32 years of service to the profession, said he feels betrayed.

“I’m a child of the Lord and these children are possessed. I’m anointed by the Lord, I look good, dress good and carry myself good. Dem just vindictive and I don’t know why dem nuh like me. Now I’m unemployed and battling around,” the teacher said.