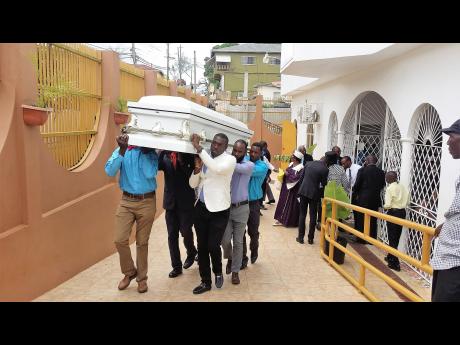 Pall-bearers taking the coffin with the remains of Knight from the church following the service. 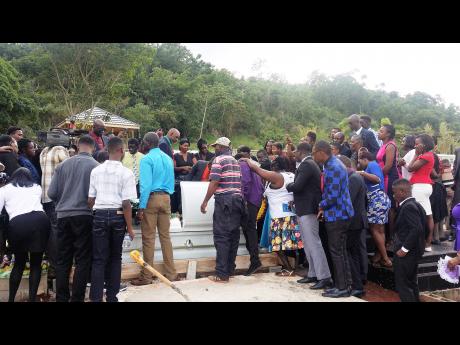 Mourners taking a last glimpse at the remains of Dr Richard Knight at the cemetery.
1
2

The Cobbla New Testament Church of God in Manchester was a picture of sadness recently, at a service of thanksgiving for young educator and churchman, Dr Richard Knight.

Scores of mourners turned out to pay their last respects to Dr Knight, who died tragically in North Carolina, USA, on November 16.

Knight died two weeks after celebrating his 35th birthday, sending shock waves throughout Cobbla and among relatives and close friends.

Tribute after tribute gave a clear idea as to who the late educator was.

His brother, Bishop Donovan Knight, said his youngest brother's passing was the darkest day in his family.

He shared that Richard lived a decent and upstanding life in Jamaica and the USA, where he was living at the time of his death.

"His record in North Carolina was impeccable. He was never afraid to take on the world. I was his mentor," said Knight.

During her tribute, Jacqueline Gooden described the deceased as an obedient, mannerly and responsible individual.

She also described him as a respectable, loving, caring and handsome young man, and stated that all he achieved during his 35 years did not cause him to forget that he was a child of God.

"His educational course had him attending the Spalding Primary and Christiana High schools; and he was of a calm disposition, very loving, but had bitter hatred for doing schoolwork as a child. He was told

by one of his primary school teachers that he would never make it, as he was the dullest of all the Knights. That statement hit him to the core and was the motivating factor for his path to teaching," said McKenzie-Knight.

She said the family became worried when he appeared not to be studying for his CXCs, and so his mentor, Donovan, decided to take him in to ensure he did.

"Richard would always complain that he was tired of studying, after he did so for just a few minutes. But while all stood worried about Richard not studying, he passed all seven subjects at one sitting," said McKenzie-Knight.

She noted that he believed in moving swiftly to his task without procrastination, even from an early age, and said as he matured, Dr Knight became self-motivated.

She added that it was his philosophy that "the sky is the limit and whatever you put your mind to, you can achieve".

McKenzie-Knight said her late brother-in-law was enrolled at The Bethlehem Moravian College, where he earned his bachelor's degree in primary education.

It was while studying there he met and fell in love with Tanisha Summerville in 2004. Four years later, they became man and wife.

Dr Knight, who lectured in computer science at the International College of the Caribbean, was offered a teaching position in Charlotte, North Carolina.

He was joined by his wife and while there the union produced two children, Dominic and Sofia.

She shared that by profession he was a teacher, principal, Christian counsellor and an ordained minister of religion in the Church of God of Prophecy.

"Richard was on a path to becoming one of the greatest black men to have travelled the streets of America," said McKenzie-Knight.

He was named among the top five principals in North Carolina, just two weeks before his death.

Following the service of thanksgiving, Dr Knight was laid to rest at the Oaklawn Memorial Gardens in Manchester.