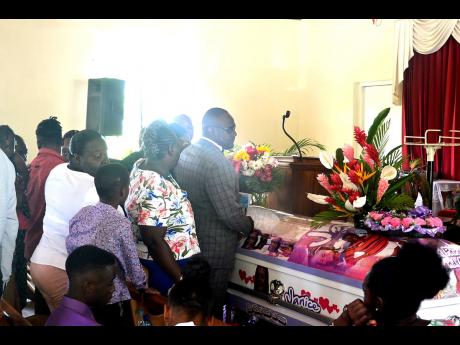 Relatives and well-wishers line up to view the body of Janice Cummings during her funeral at the Chatham Seventh-day Adventist Church in Blytheston, St James, on Sunday.

There was no restraint of grief or tears as relatives and friends filled the Chatham Seventh-day Adventist Church in Blytheston, St James on, Sunday, July 28, to say farewell to Janice Cummings, who was remembered as a doting mother and ever-present role model.

There were numerous tributes in speech and song during the three and a half hours-long service, presided over by guest preacher Alberga Foster, as well-wishers made known their affection for the 44-year-old Cummings, who passed away on June 18 after a period of illness.

The church was filled with gospel tunes such as My God Answers Prayer and When He's Four Days Late. Presentations were made with accompaniment from Celine Dion's Goodbye's the Saddest Word and Whitney Houston's I Look to You.

Cummings, affectionately known by many nicknames, including 'Winsome' and 'Jano', was born on January 30, 1975, to parents Ezekiel Cummings and Kerline McIntosh, the first child for her father and the third for her mother. A graduate of the Muschett Comprehensive High School in Trelawny and the Kenilworth Academy in Sandy Bay, Hanover, she wore many hats in her working life, including as a data-entry clerk and a Transport Authority employee, while she and her spouse, Beresford Edmondson, raised their only daughter, Shanea.

In presenting the eulogy, niece Myosha Cummings-Grey remembered her aunt as being a mother figure both to her own child and to other young family members.

"If Janice could buy the world, undoubtedly it would be for her daughter, Shanea, but she also took care of many nieces, nephews, cousins, aunts, grandchildren, brothers, and sisters, not to mention her dear mom, Kerlene McIntosh. She was a strong, independent role model and she was like another mother to me," said Cummings-Grey.

Cummings was later buried at the nearby Content Cemetery.