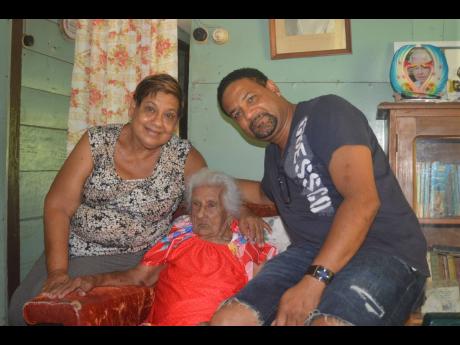 Olive Luckie, who is recorded as the oldest living resident of Little London, Westmoreland, celebrated that distinction with several family members on Wednesday, July 31, when they gathered at her home for her 106th birthday.

Although the elder Luckie now suffers from loss of hearing and short-term memory, and can only speak a few words at a time, she was able to express contentment at this latest milestone in her long life.

"I feel sickly, but I'm not too bad. My birthday is nice," the centenarian declared, when asked how she felt about the celebration.

Born in the Georges Plain community on July 31, 1913, Luckie - affectionately called 'Mim' by friends and relatives - was raised by her grandmother in Georges Plain before later moving to Station Road in Little London, where her father Robert Wheatley lived.

The couple worked together as rice farmers, and Mim also worked the fields at the New Hope sugar estate, where her husband was a supervisor. She was also a founding member of the Little London New Testament Church of God near her home, and is currently the only survivor of the church's founding members.

Daughter Viviene Luckie said that despite her mother's advanced age, Mim still has the Christian training she imparted to her children.

"Her memory is still good because I'll start singing for her and she'll join in the chorus, or if I'm reading the Beatitudes in the Bible, I'll start and she finishes it. She will pray for you and ask the Lord to give you travelling mercies," the younger Luckie said of her mother.