Bull Bay residents said quarantine should have been sooner 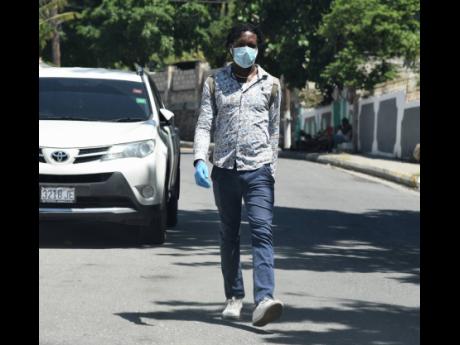 A resident of Shooter’s Hill in Seven Miles, Bull Bay, St Andrew, walks along the Shooter’s Hill main road in mask and gloves. He is taking no chances with COVID-19.

Some residents of Bull Bay in St Andrew have praised the Government for its decision to prohibited persons from leaving the area as part of a measure to contain spread of the new coronavirus, COVID-19.

“To have the communities quarantined is a good decision, but it should have been taken a while back,” Jovielle, 21, a resident of Bull Bay told THE STAR. “It wasn’t much of a secret that she was up and about interacting with people, not only in Seven and Eight Miles, but all over.”

Prime Minister Andrew Holness declared Jamaica a disaster zone and quarantined the Seven and Eight Miles communities. At the time, the chief medical officer, Dr Jacquiline Bissasor McKenzie, said that at least 30 contacts in the communities were traced to Patient Zero, the first person to have tested positive for COVID-19 on the island.

Residents of the Seven and Eight Miles communities have been told to stay at home unless authorised by the ministry of health and Wellness.

Jovielle said that given the realities, his “peace of mind” is now affected, but he is glad that the authorities have moved to try and contain the spread of the virus.

Abigail, 19, who lives in Seven Miles, said she is still in a state of disbelief that things have spiralled so quickly.

“I’m nervous for my friends and family, but everybody is doing what they are supposed to be doing to keep safe. It is really unfortunate, though, that the first case had to be right here, because I had plans to conduct some business, but I guess I just can’t do it now,” she told THE STAR.

Abigail is hopeful that things will soon return to normal.

“I trust in God, and I believe that once we take the necessary health precautions we will be safe,” she said.