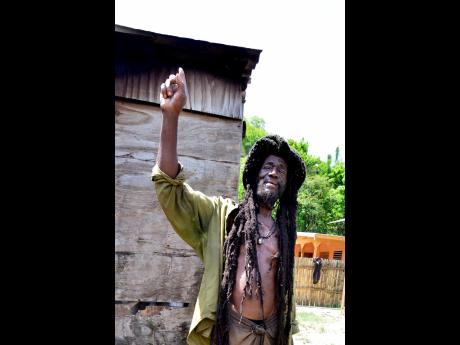 Kenyon Hemans Ras Mokko, from Sunning Hill, in the parish of St Thomas, caters to tourists at his dwelling on the banks of the Plantain Gardens River.

He shares a name with a prominent movie actor, but to most people he is simply Ras Mokko. And like Samuel Jackson, the actor, this St Thomas native has been putting on a show for the word to see, and has been attracting tourists, thirsty for the Jamaican experience, to his Sunning Hill community.

It was a rather rocky ride down to Ras Mokko's riverside cottages where he dwells and operate his Airbnb. He has not welcomed any international visitor since COVID-19 showed up in Jamaica in March, but he anticipates that when the country reopens for business he will continue his mission of sharing a slice of rural Jamaican life with others.

"The tourist them love it here and when them come it's for a while, they don't want to leave because them a see part a we culture them nuh know, and me glad fi show that," the Rastaman told THE WEEKEND STAR.

Ras Mokko is famous for 'Ras Kitchen', a YouTube production that highlights his culinary skills.

"A ital food me cook enuh, without salt, but a that the guests them like, them say a KFC Rasta chicken Ras Mokko a cook up there," he said while laughing uncontrollably.

Ras Mokko has managed to generate a massive fan base through his cooking skills, thanks to the work of Canada-based producer Matthew Pancer, who captures and produces Ras Kitchen and places it on YouTube. But Ras Mokko was a star long before that.

"Me used to work a Portland a cook a hotels for the white people and them love it, and then me decide fi come pon me own now," he said. "Every nation enjoy my food so them know me from long time, and you know them find me anywhere."

Ras Mokko, whose dreadlocks are in excess of seven feet long, said he started cooking "little yam seed when me a little baby growing up in a me brown pan".

"People like me a lot and when them see me them call and say a you a do the YouTube thing, and it me make me feel good," he told THE WEEKEND STAR.

And about his long dreadlocks, Ras Mokko said he started out due to a phobia against combing his hair.

"You know seh when me did a go school though me teacher always have hell with me fi comb me hair and all dem ting deh, until teacher a tell me say me a go be a Rasta one time," he said.

"All policeman buy comb give me fi comb me head and me nuh comb it and from 1971. I man a Rasta until now. Me nuh eat meat either because me find out say them hurt me belly, so that mek me just stick to the natural way," Ras Mokko added.