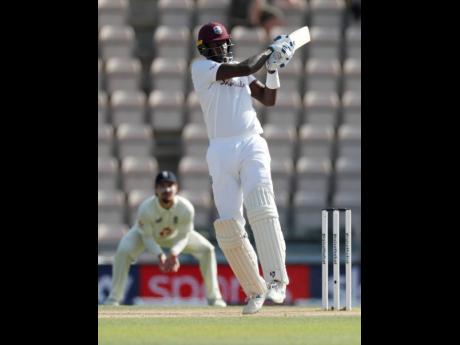 Windies captain Jason Holder bats during the fifth day of the first cricket Test match against hosts England at the Ageas Bowl in Southampton on Sunday.

Former Windies batsman Lawrence Rowe says current captain Jason Holder is too low in the team's batting order and that the all-rounder would be better served at number six in the team.

Rowe and Holder were guests on the Andrew Mason radio talk show in Barbados recently.

"I think you are batting a little bit too low in this team," Rowe said to Holder. "I think your stock in this team is at number six. I honestly feel that you are one of the better players on the team, technically sound and look the part and can play the part. You can come in the middle of the batting. If we have any problems, you will have one of the top five batting with you."

Holder has never batted higher than number seven for the Windies since his inclusion in the Test team in 2014. He has so far scored 434 runs at an average of 27.12, with a top score of 74, batting at number seven in 11 matches, while his numbers fare even better at number eight, where he has scored 1,248 runs at an average of 32.84 in 30 matches, with a top score of 202 not out.

Holder, who is now the number two-ranked bowler and number one-ranked all-rounder in Test cricket, says he is considering moving up the order one day.

"It's an aspiration of mine," he said. "I want to move up the order. Ideally, I do believe I have what it takes to come up the order and bat higher and take a bit more responsibility with the bat. Hopefully, in the not so distant future, you can see me coming up there and plying my trade at number six."

Currently, the number six position in the team is occupied by Jamaican Jermaine Blackwood, who made a match-winning 95 runs in the second innings to help the Windies beat England in the first Test on Sunday.

Holder and his team will be looking for victory in the second Test, which started today at Old Trafford, and a win for the Windies would give the team an unassailable 2-0 lead in the three-match series.