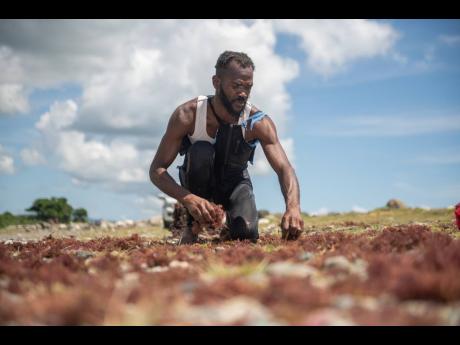 Sheldon Napier sorts through his catch of Irish moss along the Roselle Beach in St Thomas last Friday. 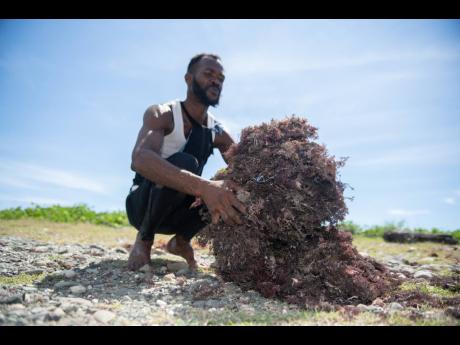 Sheldon Napier has been diving for Irish moss for 30 years.
1
2

The diver, who followed the plunge of his father and older brother, described his job as a hard but necessary one.

"It is challenging, but we have to do it because it's what I do for a living. It's how I make my money. When my father and brothers were doing it back in the day, there wasn't much funds on it, but now is the time when it start a pick up," he said, revealing that there is a great demand for the aquatic product.

Napier was seen around midday last Friday, near the coastline in Roselle in the parish, with various types of Irish moss laid out along the roadside. "We dry it on the beach and take it home, but sometimes we don't have enough time to take it home because customers come same place on the beach to take it from us."

In addition to diving for moss, Napier shared that he also hunts for and sells fish and lobster. However, the moss yields better returns.

"This is more profitable than fishing. We can get the fish at any time, but we can't get the moss any time. There's special time when we have to dive for this, like now, when the sea is calm. When it rough we can't dive to go down, because it's very dark and dirty and very risky."

He told THE STAR that he has often come into contact with predatory sea mammals, but has learnt how to handle himself -- that is, by avoiding confrontation -- even if it means surrendering his hard-earned catches.

"It's their world and we go into it, so we're not really scared, we just go to do what we have to do, and when we see them we step aside and let them do their thing, while we do fi we ting. Sometimes we see the shark, the barracudas dem and so forth, but dem nuh really trouble us unless we have what they want. Like when we dive and shoot fish and heading back with the catch on the string and they are determine that they want it we have to let it go and give it to them.

"It's very risky -- life and death. There's nothing out there to hold on to, and you have those who dive with tanks and compressors, but we do 'free lungs'. We stop our breath, dive to the bottom of the depths, and come back up on top," he said.

Irish moss has been touted as a superfood, and Napier said it is hard to fill the strong market demand for the product. He said, too, that the activity is heavily regulated.

"Each diver has to have them licence now, and there are a lot of restriction on it right now, like tax. People who used to just wrap it up (the moss) and send it through the post office can't do that now. You have to have a licence to export it."

But adhering to the legalities of the trade doesn't bother Napier, neither does the competition that he has on the shores of Roselle.

"I'm not worried about competition -- every diver have dem customers. And if we get a big order, then every diver come together and supply. We work together," he said.