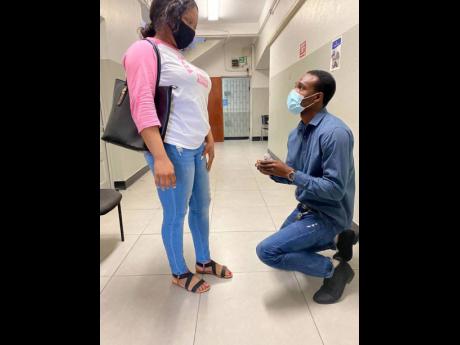 After leaving the courtroom, Andre Chantiloupe got down on one knee and asked his common-law wife of 14-years, Neisha Morrison, for her hand in marriage.

The usual court proceedings were in session when Andre Chantiloupe was called to defend himself against a claim from his common-law wife of 14-years, Neisha Morrison, that he physically assaulted her.

While addressing the Kingston and St Andrew Parish Court, the 36-year-old Chantiloupe slowly pulled a ring from his pocket and attempted to go down on one knee. He then popped the question.

"Will you marry me?" the Love Lane, Kingston, resident asked, much to the amazement of persons the courtroom.

Morrsion's eyes were filled with tears as Chantiloupe expressed his undying love for her. Parish Judge Lori-Ann Cole-Montague stared in admiration, while officers of the court were left in awe.

Chantiloupe found himself before Cole-Montague after he allegedly assaulted his girlfriend, with whom he shares two children - ages 10 and five - on December 23, last year, which left her with swelling and bruises on her face.

Morrison reported the matter to the police and Chantiloupe was charged. In court yesterday, Cole-Montague had Chantiloupe apologise to Morrison and referred the couple to counselling.

"Neisha, I realise that I have done you wrong, but I really want to apologise to you and make it right for the rest of our life," he said. "Our relationship will never end up before a judge again because this is not what I want for us, the kids and the rest of our family."

Cole-Montague told Morrison that she did not have to make a decision on the spot. He also told Chantiloupe to take Morrison somewhere nice.

Outside the courtroom, Chantiloupe told THE WEEKEND STAR that he bought the ring last June while Morrison was overseas.

I cheated and thing

"She came back in November and I had the ring, but because she was so mad at me, I never got the chance to propose. The relationship was up and down because I'm being honest, I cheated and thing, but I stopped those things, and people still use it to judge me, and kept on bringing news to her," he told THE WEEKEND STAR.

He said things got to a head two days before Christmas when he assaulted Morrison during a dispute. He said that he has had time to reflect on his actions, and felt it was important to make a bold statement to Morrison.

"When I woke up this morning and I left out, and went back home to pick up the ring because I had to make an example, even if I had to do it in front of the judge to show her that is she alone matter," Chantiloupe said. "I had to show her that I only want to be with her and my children because there is nothing out in this world, and family is the most important thing to me."

As for Morrison, it was one of the most beautiful moments in her life. She wasn't expecting a proposal, moreover in a courtroom. The 27-year-old is looking forward to tie the knot sooner than later.

"I was so shock because I wasn't expecting this," she said. "We've been through a lot and I know he is making it right, and I was trying myself, but we will be moving up from here," she said.

The relationship started on a football field in the community some years ago.

"I was playing football and I saw her and stopped playing because I couldn't resist her beauty, and I knew there was something special about her. From there it was just a non-stop flight for us," Chantiloupe said.