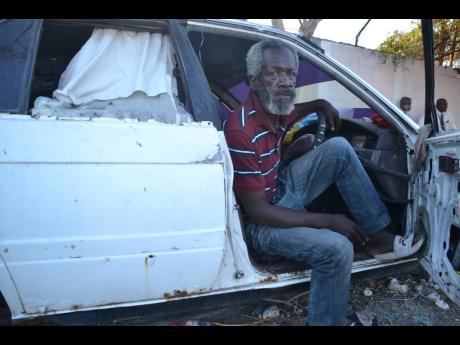 Grant said he would love to get somewhere to live, or at least get a job so he could rent a dwelling.

A broken-down Toyota Corolla motor car stationed on the side of Caymanas Road in Waterford, Portmore, is where Leroy 'Papa Dadaz' Grant, 65, has been living for more than a year.

After losing his job as a gas station pump attendant, Grant fell on hard times. Unable to pay rent, he was evicted. With no place to stay, he captured the 1990 model car.

"The man that own the car deh a farrin and him park it over here so and from me move, me just live in a the car because me never have anywhere else to go," Grant told THE STAR.

The car is decorated with clothes and other articles belonging to Grant. The pavement beside the car serves as his 'shower'.

"Me catch water in a bucket and bathe right deh so," he said, pointing. "Then me go inside and put on me clothes and sit down until a time to sleep. Me feel afraid sometime and me cold, but then another time me say anything fi happen will happen and don't put it on my mind."

Grant explained that he has no family to help. He said that he has two sons who are not in Jamaica, and claims he doesn't know where they are.

"A lady around the corner give me some food sometime and me just eat it and give thanks because I don't have anything else," said Grant. "Me would want a house with bathroom and things like that because nobody never yet try help me or even to give me a work. Anywhere they put me, I will take it."

Grant's neighbour, Florabell Elwood, says she prays that he gets some assistance, as he was very kind to other people.

"Him get mash up bad from him lose him work. Him is a man that use to all buy him groceries come in from MegaMart and thing when him a come in from work," she said. "Him is not a mean person either when him use to have. On Sunday him a buy ice cream for the kids and it nuh matter the amount of money."

She added: "People in the community try to help him like give him food but it is not enough. Him need help bad, like clothes and somewhere to stay because the car don't safe either."