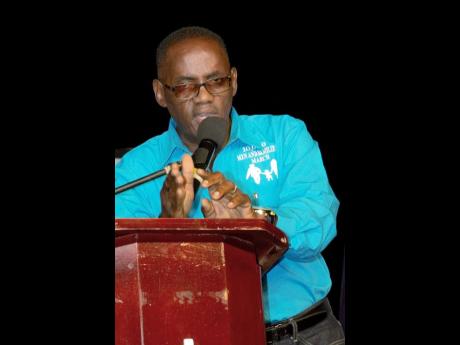 Organiser of the annual 10,000 Men and Family's March in Spanish Town, Bishop Rohan Edwards, says the time has come for pastors to arm themselves to protect their congregation from vicious men.

Speaking against the background of the murder of Andrea Lowe-Garwood, who was shot dead on Sunday by a lone gunman while worshipping at the Agape Christian Fellowship Church in Falmouth, Trelawny, Edwards called on pastors to put in place all the necessary security features in churches to protect worshippers.

"I made this call before and I am saying again, it's time for churches to put proper security mechanisms in place to protect the flock, including pastors arming themselves," said the firebrand bishop who oversees the Lighthouse Ministries churches across the island.

"There is a concept in Jamaica where people don't believe in pastors carrying firearms, but this is a wrong concept. Pastors are human beings and if these men can carry out these acts in broad daylight, you just can't play with them," he said.

Citing the 2018 killing of 29-year-old James Johnson, pastor at the Church of God of Prophecy in Old Harbour, who was shot and killed by a lone gunman while he was conducting Bible studies at the church, Edwards described the men carrying out these acts as heartless and wicked.

"They have no respect for the house of God," he said. "It hurts my heart to see what took place at Pastor Junior Rutty's Church in Falmouth. I don't believe that God would punish any pastor if a gunman come into his church and he is met with return fire power. I really don't think God would hold it against the pastor."

Edwards said congregants must feel secure in church and every church leader has a responsibility to protect the people who attend their church.

"As a pastor, my job is to watch over the flock, and there are different ways to do so. There is a place for mercy and a place for wisdom," he told THE STAR.

As an initiative of the annual 10,000 Men and Family's March, that will be held virtually on March 14, Edwards said he would be organising a number of Christian brothers and sisters to go into inner-city communities to speak to young people on the importance of abstaining from violence.