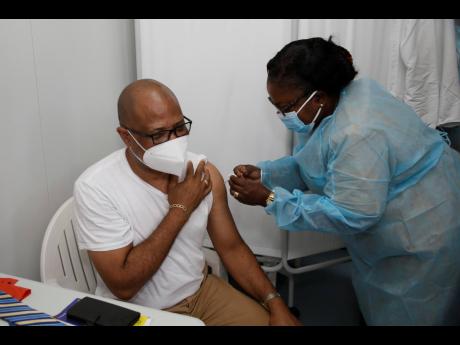 Health and Wellness Minister Dr Christopher Tufton is assuring Jamaicans that there is overwhelming evidence to support the efficacy and safety of the AstraZeneca vaccine.

"We don't bring vaccines here unless they passed clinical trials and are approved by the expert committees of the World Health Organization. It is on that basis that we introduced vaccines to the population," he said. Yesterday, it was reported that countries like Denmark had temporarily suspended use of the vaccine after reports of some people developing blood clots. But its health authority said it had no evidence the vaccine was responsible. Jamaica started its vaccination drive on Wednesday.

"So far there are no major concerns raised around adverse effects. The most challenging aspect of the vaccine roll-out is to get Jamaicans to take it," he said. Tufton cited that 83 per cent of the ministry's national target for day one was met. Tufton, who visited the Spanish Town Hospital and the St Jago Health Centre on Thursday to promote the vaccine programme, praised the health teams at both institutions for surpassing Wednesday's target.

Tufton said he is pleased with what is happening at both locations, proclaiming that the trend is encouraging and the ministry will reach the numbers it set out to achieve. He also noted that there had not been any issues with logistics to get vaccines from one point to another.

Meanwhile, Dr Francia Prosper-Chen, medical officer of health for St Catherine, is appealing to residents to take the pandemic seriously and observe the protocols.

"Our parish has seen an exponential increase in COVID-19 cases over the past two months, and this we can attribute to the lack of adherence to the protocols," she said. "In December, we had nine active cases in Linstead. Now we have 102, this is a sharp and significant increase." According to the health ministry, St Catherine recorded nearly 500 cases between Monday and Wednesday. She said this raises serious concerns about the rate of transmission.

Prosper-Chen also revealed that six healthcare workers have tested positive for the virus and are now in isolation, while a number of others who came in contact with them are being quarantined. She added that the department is expected to be done with healthcare workers by this weekend, thus starting the process of vaccinating members of the security forces.