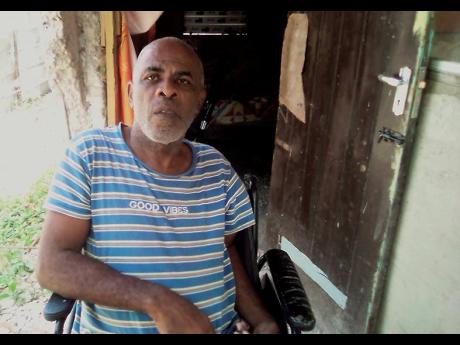 Carlton Watt was making his way through life as a taxi operator until December, 2018, when he suffered a major setback. The 59-year-old Spanish Town resident was attacked and shot by gunmen as he made his way home one night. He was hit on the right side of his head.

"I drive in and parked at the gate; go in the house and was in the bedroom lying down. Then mi hear the door kicked in, and mi get up, and when mi get up mi see two man and them seh mi nuh fi move, mi must give them all the money and mi phone," Watt recounted.

The men opened fire hitting him. Police data shows that 1,287 persons were murdered in 2018, the majority of whom were shot. Watt said doctors gave him a 50 per cent chance of surviving the attack.

"When mi get the shot everybody think mi dead, but thanks be to God, I am still alive," Watt told THE STAR.

The former cab driver said he spent three months recuperating in the hospital, and on his return to his house, he discovered that it had been broken into and the items stolen.

He has found life difficult ever since. Now a wheelchair user, Watt is living in subhuman conditions. The roof of his house leaks whenever it rains, forcing him to use a tarpaulin to cover his bed whenever there is a downpour. Additionally, he wrestles with the fact that his floor is pure dirt.

Watt desperately wants to see some change in his living conditions. He revealed that he has a brother in the United States of America who would help him out sometimes. However, his brother suffered severe health setbacks after contracting COVID-19.

"I was trying to fix up the house before I got shot. I had eight bags of cement and they were also taken away while I was in the hospital," Watt said.

"I cannot work, walk or stand up. I have a lady over the next side who help me out a lot. I have to stop going to Public (Kingston Public Hospital) for treatment because it cost $6,000. Mi now go to Spanish Town where it cost $2,000, but mi nuh go for two weeks now because I don't have the money."

Karine Francis, the People's National Party councillor-caretaker for the division, told THE STAR that she was walking through the area when she came upon Watt and was moved by his situation.

"For me this is not about politics, it's about helping another human being. I am speaking to everyone out there who can render some assistance to do so," said Francis, who claims to have made contact with the Poor Relief Department in the parish to get help for Watt.