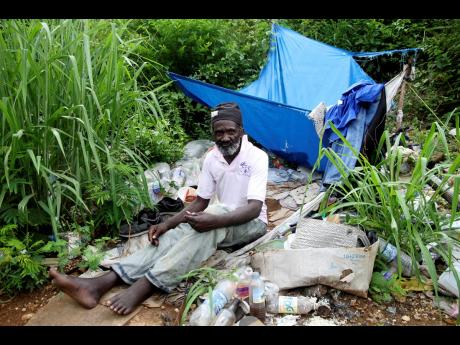 This is the place Byron Pusey, of New Longsville, Clarendon, calls home. 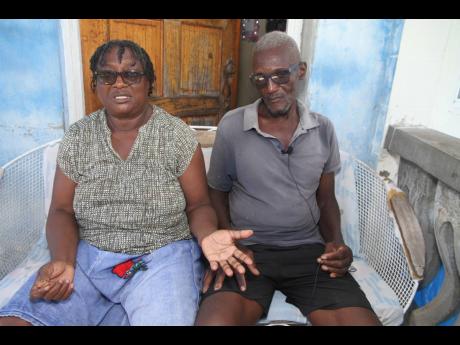 Saldore and Ivanhoe Pusey of New Longville are overwhelmed at the state of Ivanhoe’s brother, Byron Pusey, who suffers from mental illness and now lives by the roadside.
1
2

Ivanhoe Pusey is now at his wits end when it comes on to aiding his youngest sibling Byron Pusey, who anyone traversing the May Pen to Chapelton route is likely to see huddled beside a tarpaulin in bushes.

Ivanhoe said they have tried everything to help Byron but without success. According to the elder brother, Byron, 67, has been struggling with mental illness for about 40 years.

Ivanhoe said that his younger brother has been without a place to lay his head since his father died, and the house in which he lived was sold about 30 years ago. Following the sale of the house, the younger Pusey reportedly started living in a cave, before moving to his current roadside location.

"Time and time again we go for him, but he always escapes and goes back to the spot," Ivanhoe shared.

He said that he as well as a neighbour have sought to accommodate Byron at their homes, but he keeps leaving. Ivanhoe said that his brother was taken to the May Pen Hospital for treatment at one point, but he walked out of the facility and returned to his familiar spot by the roadside.

Cognisant of the fact that passers-by may think that Byron has been abandoned by his family, Saldore Pusey, Ivanhoe's wife of 30 years, said it pains her heart to see his situation. She said that every morning they take breakfast to him, but most times he eludes them.

"We would like him to go to the infirmary, I don't like the condition he is in. I just cannot take it. Mi nuh know, wi just can't work it out," Saldore said in frustration.

The couple said their one wish is for Byron to be placed in the May Pen Infirmary and that way he could be in an enclosed surrounding, where he could not escape to return to his familiar spot. The Puseys said that if he is in a facility, they would take meals and clothing to him, and help to properly care for him.

However, they said they contacted the infirmary and were told it is not taking in any new patients.

Mayor of May Pen Winston Maragh confirmed the stance as he shared that the infirmary is not taking any new cases, revealing that the only ones being taken in are the ones living at the hospital.

Saldore said they just wish the authorities in the parish would assist them to get Byron off the streets.

"I don't think they are doing enough for the mentally ill in the parish because if they were, he would not have been on the roadside so long. I can't understand how you have so many people on the streets who are mentally ill, with nothing being done to get them off," she complained.