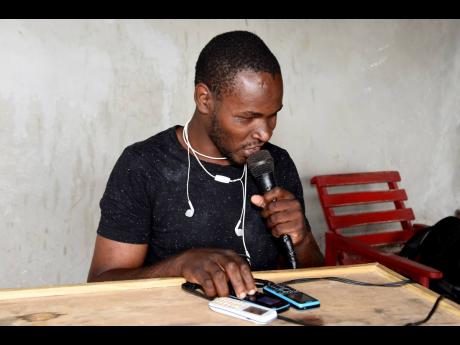 Andre ‘DJ Squeezer’ Bryam chants on the microphone as he plays a request. 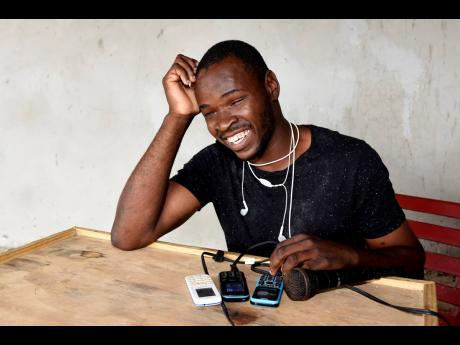 Bryam got into music in 2012 after being inspired by a friend. 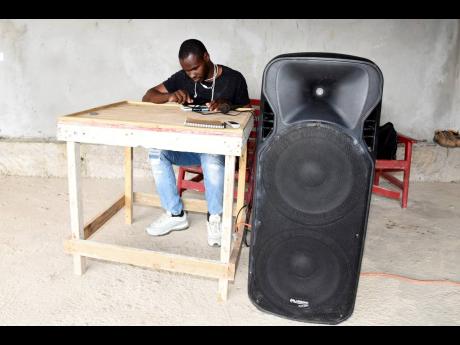 Bryam plays his music through three ‘banger’ phones and a boom box.
1
2
3

Being visually impaired is not a deterrent for Ande Bryam to fulfil his dream of being a top sound system operator/DJ.

The 26-year-old lost his sight at age one due to an eye procedure that went awry. Raised by a single mother, he decided very early that he had to defy his physical challenges and find a way to make a living to support himself. A graduate of the Salvation Army School for the Blind, Bryam learned the basic skills that enable him to survive. He started out working on construction sites and picking coconuts for a living before finding his passion in music. Bryam, who calls himself DJ Squeezer, plays songs from three 'banger' phones through an amplified speaker box at parties in his community of Top Jackson in Bog Walk, St Catherine.

"In everything, it is a gift from God sometimes mi wonder how mi do it but it is gift from God," he said while demonstrating how he operates the system..

Bryam said he got into the music business in 2012 after being inspired by a friend who he used to follow around and a DJ on the mike. According to him, his friend sold the sound system and that's when he made the decision to pick up the slack.

"Mi tell him mi want to buy a box and him help mi towards a box and mi have a next bredrin and mi tell him to give some tune. In my spare time, mi love to practise some experiment so mi start to practise on these," Bryam said pointing to the phones. "Mi find out sey it can work, so I sit down and go through the phones and say to myself, 'I must can play sound like the man dem that use laptop'."

Bryam said he got the box for half the cost because the sellers were impressed with his skills. He got to work and arranged various songs from various artistes in different music files and put them on the phones by himself, using the numbers on the phone to mark each file. When a Beres Hammond track was requested, Bryam was quick to locate the file and with microphone in hand, proceeded to introduce the song while simultaneously raising the volume on his speaker box. The curtailment of parties due to COVID-19 has put a damper on Bryam's business.

"It is hard because if mi nuh play a party, mi have to pick coconut, or when mi get a call to do some construction work. I want the entertainment business to open up so I can get some parties," he said.

Despite his prowess, Bryam said that he would do even better if he had a laptop that is able to contain large files but he said that he cannot afford to purchase one at the moment.