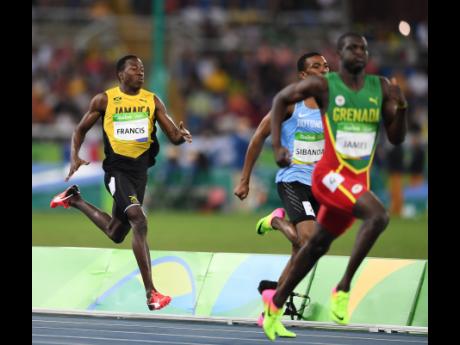 Ricardo Makyn/Staff Photographer Javon Francis (left) runs in the semi-finals of the men's 400 metres at the Olympic Games in Rio de Janeiro last month. At right is Kirani James of Grenada and Karabo Sibanda (centre) of Botswana.

Javon Francis is hell-bent on making his mark as an individual 400-metre runner at next year's International Association of Athletics Federations (IAAF) World Championships in London, England.

Francis, who anchored Jamaica to silver in the men's 4x400m at the Rio Olympic Games last month, failed to make it past the semi-finals of the 400m after finishing fifth in his heat.

"It was rough. In the heats, I got lane eight and in the semi-final I got lane one. But it was all a learning process, so I am not beating myself. I just have to learn to run better from these lanes, but I still give God thanks I got a (relay) medal and came home injury free," he said.

"It was my first Olympics and the experience was wonderful. There were a lot of people out there trying to make Olympic teams, but I made the Jamaica Olympic team, which is very hard to make because we have some of the top athletes in the world," he added.

The former Calabar sensation said that after soaking up all the wonderful experiences in Rio, his intention now is to be on as many teams in the future, with the World Championship next year being his immediate target.

"To make that Olympic team I had to work hard and I will have to work hard to make many other teams. Next year is the World Championships and I am focused on making the 400 metres final this time. I am just going to go back to training, sit with my coaches and decide what I am supposed to do; but next year, I am going to try and make my mark," he said.