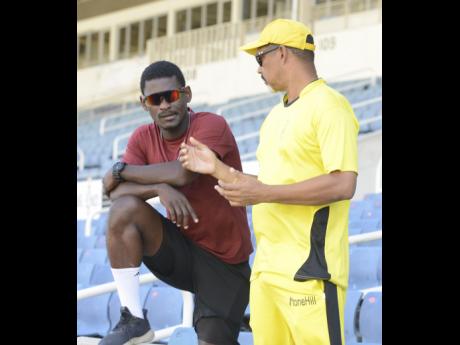 Jamaica Scorpions captain Paul Palmer Jr, said despite the recent change in coach, and the addition of Windies player returning from the tour of Bangladesh, players still have to stand up and be counted, as nothing will be given to them on a platter in the Cricket West Indies Professional Cricket League Regional 4-Day competition. The Scorpions resume the competition tomorrow when they host the Windward Islands Volcanoes at Sabina Park in Kingston.

Less than two weeks ago, the board of directors of the Jamaica Scorpions, relieved former head coach Robert Samuels of his duties, by not renewing his contract, after nearly three years of conditioning the franchise. The very popular Robert Haynes was drafted in as interim head coach to manage the side for the rest of the season.

But even with the positive influence Haynes has had in his limited time thus far, Palmer, says the onus is still on the players to produce the goods.

"There are changes, but even with those changes, we have to go out and play cricket positively," he said. "We still have to find ways to get the job done. So we will go out and try to execute our plans and try to get the that job done," he insisted.

But after throwing away their opening game from a winning position against Barbados, to lose by 41 runs, Palmer, strongly believes the team has the depth and quality to turn its poor start around and challenge for the title.

"We believe can make the change. We are all capable batters, capable of batting well as we have showed in the past. It's just now we have to do it more consistently. We have to be consistent in our approach when batting, by remembering our plan and what works for us," he reasoned.

The team received a major boost with three Windies players: Rovman Powell, Oshane Thomas and Fabian Allen returning from international duty to join the squad, and with the addition of Guyanese Assad Fudadin to the roster, Palmer is confident they can claim the victory tomorrow.

"It's a big boost for us because we've added a lot of experience to the team. They were playing international cricket and to come back to first class cricket means they are bringing a host of experience. They are no strangers to the group, so we are looking very positive going forward," he said.

"We lost the first game, a game we should have won but gave it away. But we have put that behind us and we are looking forward to this game. So it's just to put our plans in place and see how it goes. We have a talented group, a good group, but it's all on paper. So we have to go out and show it on the field. But I don't see why we shouldn't be confident, we have put the loss behind us and we are pretty confident going forward from here," he said.