Jaco back to mentor MBU youngsters 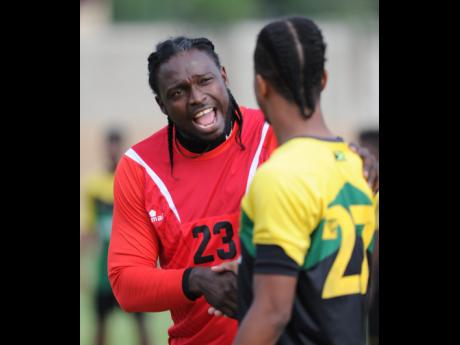 Veteran goalkeeper Jacomeno Barrett, who has made a return to relegation battlers Montego Bay United (MBU), said with his experience, he will bring some solidarity to the defensive unit.

Barrett, 34, who was instrumental in MBU's 1-0 win over Mt Pleasant FA on Sunday, had left the Tucker-based club last January to suit up for Humble Lion FC.

"Me coming in the back is to give some strength to the defensive unit, and encourage the youngsters also to pick up the spaces that were being left open. It's not like they can't do it, they just need to believe in themselves," Barrett said.

Barrett, who is a naturally vocal goalkeeper, said it is something that is helping to keep the defensive line on point all the times, even though it can at times be tough.

"It's somewhat hard at times, just like talking to your kid. Sometimes they listen and other times they don't, so I'll have to constantly remind them," he said.

"Yes, sometimes I'll shout at them, but after, I'll pull the one aside and let them now it's just because of the heat of the game."

"It's (keeping the team focused) intense and, you know, at times nerves do chip in. However, we have to keep calm and keep motivating the youngsters to keep a level head all the way to the end."

When asked if he is looking beyond this season with MBU, Barrett said he is just taking it one step at a time.

No one knows what the future holds, so I'm just trying to help whatever way I can for MBU to get back their feet beneath their body."