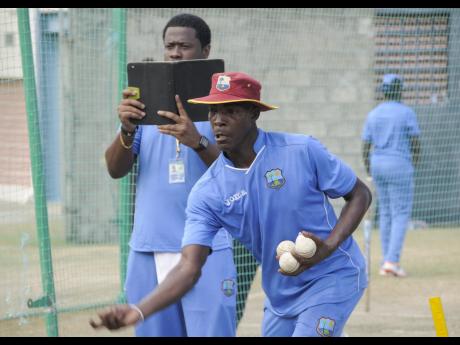 Vasbert Drakes (right) during a West Indies Women practice session at Beausejour Cricket Ground, St. Lucia on Friday on October 16, 2015. Drakes was announced as an assistant coach of the West Indies senior men's team along with Esuan Crandon and Toby Radford.

Cricket West Indies have once again snubbed legendary opener Desmond Haynes, this time overlooking him for one of the three assistant coach spots for the men's senior side.

The 62-year-old Barbadian was among an 11-man pool put forward last September by director of cricket, Jimmy Adams, from which candidates would be drawn to replace the departing Australian Stuart Law.

But CWI earlier this month controversially appointed Richard Pybus as interim head coach even though the Englishman was not part of the shortlist, and yesterday announced former West Indies fast bowler Vasbert Drakes, Esuan Crandon and another Englishman Toby Radford as the coaching support staff.

Haynes, who in the past served as a batting consultant, had publicly stated his desire to returning to the Windies coaching setup and had received the backing of iconic former Windies skipper, Clive Lloyd.

Former Windies batsman Floyd Reifer, who oversaw the Caribbean side's only series success on the recent Bangladesh tour, when he took charge for the Twenty20 phase, has been also overlooked along with former Windies senior team bowling coach, Roddy Estwick.

Both Reifer and Estwick had been on the shortlist to replace Law, along with Crandon and Radford.

Drakes oversaw West Indies Women's capture of the 2016 T20 World Cup title in India, but was sacked a year later as part of a management shakeup, following the team's wretched outing at the 50-overs World Cup in England.

"It is an honour to be back working with West Indies cricket again," said Drakes, who was not selected from the shortlist.

"As someone who played the game at the highest level, it has always been my wish to contribute to West Indies cricket and give back to the young players. We have a tremendous group of players here, full of ambition and hungry for success.

"Our role as coaches is to offer leadership and sound advice and to share knowledge and create an environment of learning. I want to see West Indies cricket grow and flourish."

Crandon, a former first class cricketer, comes to the Windies setup after engineering his native Guyana Jaguars' sweeping success in the first class tournament where they have won the last four titles convincingly.