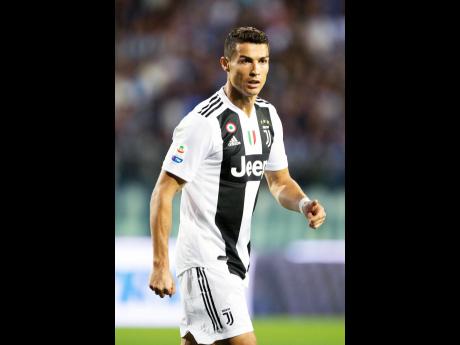 Cristiano Ronaldo had a penalty saved but it mattered little as Juventus beat last-place Chievo Verona 3-0 to extend their advantage in Serie A yesterday.

It was a bad start to what will already be a difficult week for Ronaldo. He makes an unwanted trip back to Madrid for an expected guilty plea to tax fraud related to his time at Real Madrid.

"There are more important penalties ... he missed a similar one this morning, too, in training," Juventus coach Massimiliano Allegri said. "However, what's important is the team won in the end.

"Ronaldo was betrayed in the first half by too much desire to score a goal. Things went better for him in the second half, when he was trying to do easier things."

Ronaldo is expected to appear before a judge in Madrid today and receive a suspended two-year sentence as part of a deal struck with Spain's state prosecutor and tax authorities last year. The agreement will cost him nearly €19 million ($21.6 million) in fines.

Separately, Ronaldo is facing a rape allegation in the United States.

Kathryn Mayorga filed a civil lawsuit in Nevada in September claiming Ronaldo raped her in his Las Vegas hotel room in 2009. Police reopened an investigation into the allegation at her request. Ronaldo has denied any wrongdoing.

Ronaldo has been playing and scoring regularly since the rape allegation emerged, but the Portugal superstar appeared distracted yesterday as he uncharacteristically missed decent opportunities.

His penalty was turned around the post by veteran goalkeeper Stefano Sorrentino at full stretch. Sorrentino, who was accidentally knocked unconscious by Ronaldo in the opening round of matches, turns 40 in March.

Juventus were already in control by that point as Douglas Costa scored in the 13th minute with a powerful 20-yard effort into the bottom right corner.

On half-time, Paulo Dybala was surrounded by Chievo players but managed to thread the ball to Emre Can to score his first goal for Juventus since his offseason move from Liverpool.

Chievo, which are nine points from safety, played well but abysmal defending gifted Juventus a third six minutes from time as Rugani was allowed a free header on Federico Bernardeschi's free kick.

AC Milan moved back into the Champions League qualifying spots with a 2-0 victory at Genoa.