Clayton moving up the ranks 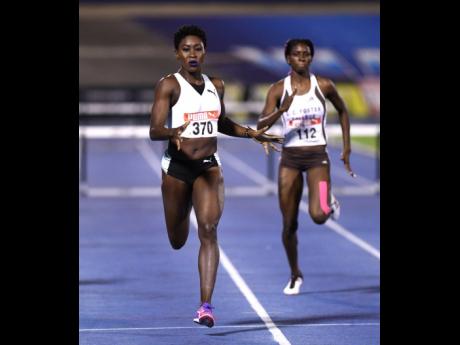 Rushell Clayton wins the women’s 400m hurdles ahead of Shiann Salmon at the National Senior Championships on June 21.

When national 400-metre hurdles champion Rushell Clayton makes her Diamond League debut today in the French principality of Monaco, lots of Jamaicans will be cheering her on. Among them is expert coach Maurice Wilson, who has watched Clayton's steady rise. Wilson rates her highly and says she is deserving of the national title.

Clayton surprised many at last month's National Championships with a big win over a stacked field in the personal best time of 54.73 seconds. Coached by Okiele Stewart, the Swept Track Club athlete downed an accomplished field in her sixth consecutive trip to the national final. Speaking on July 8, Wilson said: "I think she has the talent and ... very good work ethic, and if there's somebody who is deserving of a national title, it would have been that young lady, Rushell, because she has always been knocking on the door."

Wilson continued: "She has not been daunted, having come to the table so many times, having competed against persons that she would have defeated in high school, so she knows that, listen, 'it's not that persons are better than me'."

After moving from Frome Technical to Vere, Clayton placed third in the 400-metre hurdles at the 2011 staging of The ISSA/GraceKennedy Boys and Girls' Athletics Championships. Since then, she has represented The Mico University College and The University of the West Indies, where she learnt volumes from hurdles technician Fitz Coleman and for whom she won the Penn Relays title in 2015.

Wilson had kind words for Clayton's Swept Track Club coach Stewart, who refined his craft in a stint in South Korea. "He would have been working long and hard here locally, would have left gone abroad and come back, shown his love for the sport and did so well," Wilson said. "But, just to say that the young lady who won, she is, to my mind, one of our top hurdlers over the years."

The Stewart/Clayton collaboration produced a personal best of 55.08 seconds and a place in the CAC Games final last year. In Monaco, the determined Westmoreland native will line up beside compatriot and Commonwealth champion Janieve Russell, reigning World champion Kori Carter of the United States, two-time world champion Zuzana Hejnova of the Czech Republic, Switzerland's long-legged European champion Lea Sprunger, and young sensation Sydney McLaughlin. This 19 year-old American wunderkind was the fastest in the world last year at 52.75 seconds and debuted on the Diamond League in Oslo with a win timed in 54.16 seconds.