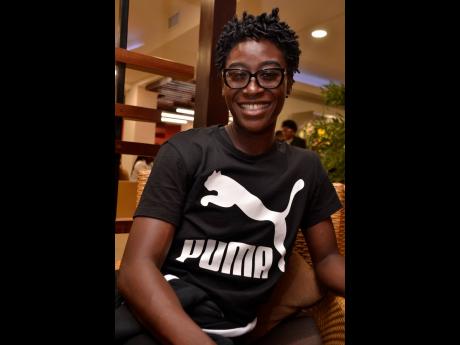 Speaking just before she left for Doha with the rest of the national team, Clayton expressed grateful amazement at her progress from her days at Frome Technical High School. Nevertheless, she has high hopes for her venture into the big times.

Confronted with her progression from 2011 in the 400 metre hurdles, the woman who clocked a personal best of 54.16 seconds to win her second-ever Diamond League meet smiled with gratitude at her improvement. "I'm coming all the way from 59.8, now I'm at 54.1," said the former Frome, Vere, Mico and University of the West Indies athlete.

She has come a long way since she finished the 2010 Boys and Girls' Championship heptathlon by covering the 800 metres in 2 minutes 27.72 seconds and she compliments her coach for the change. "Even half my college years, I was just doing it just to get through school but then there's somebody by the name of Okeile Stewart who believed in me and I started believing in myself," she said of the Swept Track Club founder. "When he says, Rushell, you can do this, it makes me believe that I can actually do it two times."

She expects to go faster. "I have run 54.1 and this is just the start,"she remarked. "It's motivation because I know I can do more and I'm pushing to do more."

She'll need to go faster in Doha as Olympic champion Dalilah Muhammad set a world record time of 52.20 seconds at the US Trials. Muhammad's teammate Sydney McLaughlin has also gone past the 53-second barrier and number three American Ashley Spencer isn't far away at 53.11 seconds.

Some might shudder at the prospect of racing in such company, but the 27-year-old Jamaican looks forward to meeting them at the Worlds. "Seeing all the other ladies running fast", Clayton explained, "it tells me I can run fast too."