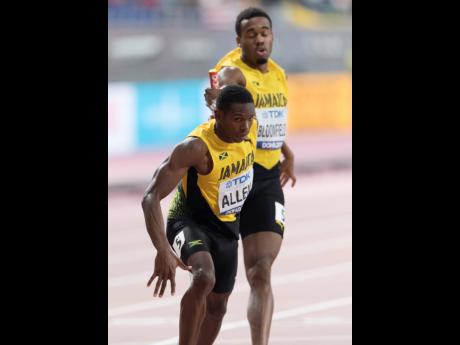 Gladstone Taylor Akeem Bloomfield (right) hands off the baton to Nathon Allen in the semi-final of the men’s 4x400m at the recently concluded World Championships in Doha, Qatar.

Two-time Olympic 400 metres finalist Davian Clarke foresees a bright future for Jamaica in the 4x400m relay and the 400m. He is full of admiration for the male 4x400m relay team that won the silver medal at the recent World Championships in Doha, Qatar, and he thinks that they will excel in the 2020 Olympics.

Speaking in October, the former Kingston College ace noted that Akeem Bloomfield, Nathon Allen, Terry Thomas, and Demish Gaye clocked 2 minutes, 57.90 seconds, the second-fastest time ever by a Jamaican quartet. "Even though everything didn't go as planned, they were still able to execute and go out and run a very good race and deliver a silver medal for Team Jamaica, and the time is significant because at the World Championships, 2:57s has won before," he said.

Michael McDonald, Greg Haughton, Danny McFarlane, and Clarke won silver in 1997 with a time of 2 minutes, 56.75 seconds, and Clarke, who is now a coach at the University of Texas, El Paso, says that the national record is under threat. "We know these guys, based on their individual times, are much faster than the athletes that I used to run with during that time from '95 to 2005, so I expect them to be able to attack our record and come close to getting it," he said.

Clarke and his colleagues all had personal-best times in the mid-44-second range, but Bloomfield and Allen have run 43.94s, and 44.14s, respectively, while Gaye blazed a personal-best of 44.46 in the individual 400m final in Doha. Despite that, Clarke said, " the reason why I'm not saying they're going to get the record is not because I don't believe they can do it because, like I said, based on their personal-best times, they're much faster than we are, but everything has to go right."

Speaking from experience, he continued: "In the 4x400, it's timing. It's working on your hand-offs, and it's not just the individual times, it's definitely a team effort, and then there's an extra component of putting the team together, structuring the team the right way, having the people on the right legs so that you can be able to run a fast time."

Allen and Gaye reached the individual 400m final in 2017. With Gaye and Bloomfield reaching the final in Doha, Clarke sees their promise and tabled valuable insight. "They have to do some research and see how fast they have to run to make it through the rounds and then prepare themselves accordingly so you know how to pace that time so you don't run all out, and then when you get to the final, then you can hammer it and go for the gold and the silver or whatever," he said.