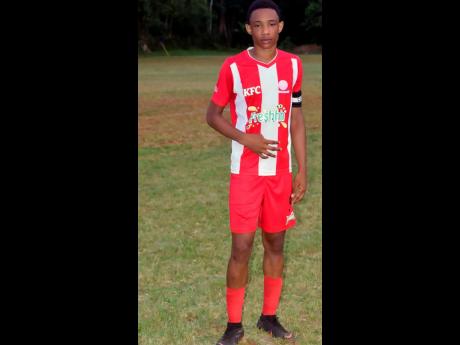 After progressing beyond the second round of the daCosta Cup for the first time in their history, B.B. Coke won their first-ever major schoolboy football title holding their nerves to win 4-2 on penalties over Garvey Maceo, after both teams had played out a see-saw 2-2 scoreline in regulation time.

Dyer, 18, who netted more than half his teams 38 goals, told STAR Sports that his target was to score at least 25 goals this season. He, however, noted that despite not reaching that target, scoring in a final and winning a trophy gives him an even prouder feeling.

"It's a great feeling to know that you're always seen as the underdog and to come out here to deliver for me, my team and my school," said Dyer who was voted the KFC Player of the Match.

"Yes, I had a target of 25 goals (at the start of the season). I may have fallen short but I am happy I was able to score in the final and lead my team to a title. I am still proud of myself."

Dyer netted a precise header edging the underside the crossbar that gave B.B. Coke the lead in the first half (33rd minute).

After leading 2-0 at 55 minutes, B. B Coke found themselves in trouble as Garvey Maceo found two late goals.

They were in a more spot of bother when they had a penalty call against them just before the end of regulation time. However, their hopes were kept alive when Garvey Maceo's effort went flying over the crossbar.

Dyer said despite the late twist in the game, they remained positive and confident.

"No, we never stopped believing. We never say never and always play the full 90 minutes all the way until the final whistle is blown. We had that belief that we were going to win even when they equalised and even after they got the penalty," Dyer said.