Sprinters will be back, says Wilson 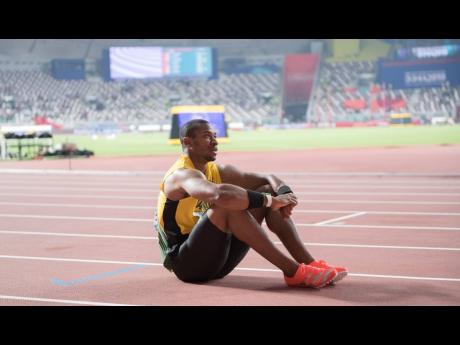 Yohan Blake, with a look of dejection, sits on the track after his disappointing fifth-place finish in the final of the men’s 100m at the World Athletics Championships on September 28, 2019.

Even though Jamaica did very well in Doha at the recent World Championships, many fans are concerned about the quality of the nation’s male sprinters in the post-Bolt era.

Maurice Wilson, head coach in Doha, says the country’s patience will be needed. According to him, the new generation will need careful guidance through the junior to the senior level.

With a golden era of Jamaican male sprinting fading into the history books, Doha saw only 100 metre fifth-place finisher Yohan Blake racing an individual final and despite Blake’s speed and experience, Jamaica missed the men’s 4x100 final for the first time since 2001. Nevertheless, Wilson can see light at the end of the tunnel. “For the purists, like ourselves, we know that everything is done in phases and it is transitional. I’m very confident this too will sort itself out,” said the Sprintec Track Club founder and head coach.

Citing a change in the sport, Wilson says the guidance received by our young athletes is critical. “A lot of our athletes at the very junior level are running well,” he noted. With the caring tone of a concerned father, he added. “There’s a clear line of demarcation between being a junior athlete and a professional athlete, even if you’re running professional times, I would say, and so they must be schooled, they must be orientated in terms of how the transition occurs.”

Then came a word of caution for those hankering for an immediate replacement for the gold medal guarantee provided from 2008 to 2016 by Usain Bolt. “Most times it is not instant and even if it is that you do well the first year, when you start to settle down in the life of a professional athlete, it’s going to take a toll,” he said.

“So, it is important for coaches to coach at a particular level to understand that there is a difference between one level and the other level,” he said of those who nurture and mould the next generation of Jamaican speed merchants.