Striking a balance! - Chang satisfying demands of athletics and academics in his first year as a senior athlete 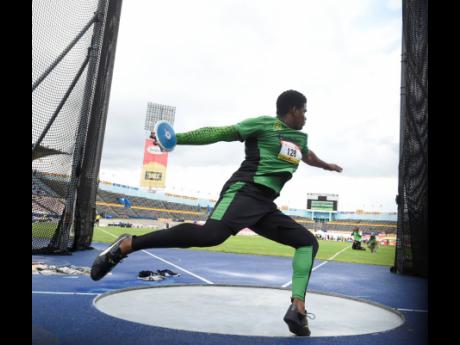 Kai Chang of Calabar High School competes in the Class One boys’ discus throw at the ISSA/GraceKennedy Boys and Girls’ Athletics Championships on March 28, 2019.

World Under-20 discus champion Kai Chang is finding the adjustment to training as a senior rough but manageable. Chang says the intensity is the big difference between how he trained at Calabar High School and his programme at the University of the West Indies.

Nevertheless, he is working to maintain a good balance between school and throwing.

Speaking after he won at the Tyser Mills Classic at the G.C. Foster College for Physical Education and Sport on December 14, Chang said: "Oh, it's a very rough one, the training environment, and the training times, everything is very different so it's kinda hard, but it's manageable."

Asked to pinpoint the difference between high school training and what he is doing now, he said, "It's not very different but the intensity is much more because now we're preparing ourselves to compete against seniors and world-class athletes, and me as a young junior, on the cusp of becoming a senior athlete, I'm still trying to work my way up there."

He is part of a training group that includes World silver medallist Fedrick Dacres, who was among an enthusiastic group in attendance last Saturday, and Commonwealth and Pan-Am runner-up Traves Smikle. Both Dacres and Smikle attended Calabar and the University of the West Indies.

Like most first-year university students, Chang had had to adjust to the fast pace of course work in the first semester. "Indeed, indeed, of course. I try my best, I try and maintain good grades," he said.

Coached by Julian Robinson as he was at Calabar, Chang was generally pleased with his performance at G.C. Foster. "It wasn't bad, you know. I'm really happy at how I threw. fifty-three isn't any good distance at all, but the feel of the technique and just me overall, I feel healthy and I give God thanks for that," he said of his winning distance of 53.97 metres.

The first year kinesiology student has a personal best with the senior men's disc at 57.66 metres, set when he was in high school.