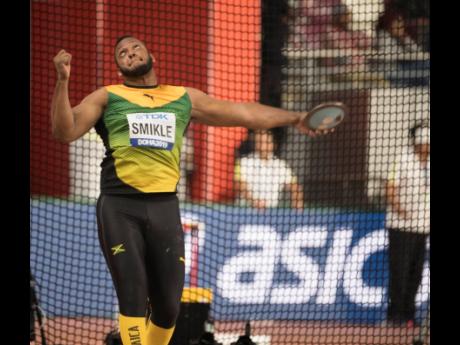 Traves Smikle, the 2017 World Athletics Championships discus throw finalist, isn't dwelling on the disappointment of missing the 2019 final. Instead, he has learnt from the experience in Doha last year and is working to be a medal contender for this year's Olympic Games in Tokyo, Japan.

The smooth left-hander says that missing the Doha final has made 2020 even more important.

"It's an Olympic year and I am trying to prepare as best as I can to go better than what I did in 2017 and also 2019", he resolved. Asked for more detail, he added, "It means making the final and being a medal contender and it means I have to work even harder to reach the goal."

The 27-year-old is disappointed about his Doha finish which came after a season in which he was the seventh longest thrower of the year at 67.57m, and in which he defeated his training partner Fedrick Dacres to win the national title.

"To be honest, when I consider the whole season, the World Championships was the place where I performed the worst," the Pan American Games runner-up said. "I performed fairly well at other meets and it's just very unfortunate that it happened at the place where it counted the most."

As a result, he is more focused.

"Mentally and physically, I have to prepare well in terms of delivering better at meets like those because that's where it counts," he said. "That's where it's important and as I've always told persons, the first stage of any world games is to qualify then whatever happens in the final happens in the final, but the first task is to always qualify.

"For that to happen at the World Championships, of course I'm going to be disappointed, but I can't let that weigh me down. It's not something that I dwell on. It happened. Coach and I spoke about it. We've moved on."

Smikle knows what he has to fix.

"Fedrick always says that my back has to be against the wall at times for me to perform, but at the same time, training is a holistic thing so one of the things I'm working on in training is being able to fire at the go," he said.

He plans to be more aggressive every time he enters the circle.

"You, as an individual, you have to decide to want to fire at these meets but you have to do it at home. Every throw at training should be aggressive as coach (Julian Robinson) says. So that's one of the things I'm working on and to better myself, as it relates to being more aggressive."

Smikle finished second to Dacres at the Fuller Memorial.