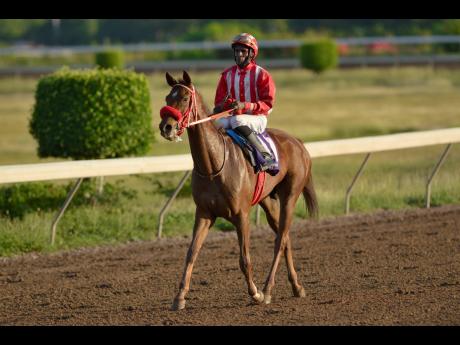 RED-hot CRYPTOCURRENCY has the handicaps and fantastic form in her favour, taking on 12 rivals for her debut among overnight allowance horses in Saturday's closing event at five and a half furlongs.

DUNROBIN should be one of CRYPTOCURRENCY's threats but has paid a hefty price, topweight 123lb, for his December 28 victory at the distance, beating late-running ANASO by three-quarter length, after overpowering AMERICAN INVADER on the lead.

DUNROBIN is allowing weight all around, picking up nine pounds, for what is expected to be a sustained pace throughout, giving 22lb to lightweight EYE CANDY, who is still champing at the bit after last Saturday's victory, making him fodder for a stalking CRYPTOCURRENCY in the stretch run.

EYE CANDY is new to the class and will try going all the way with nine-pound claimer, Ramon Nepare, as trainer Dennis Lee, again, proved last week, with Anthony Allen, that claiming apprentices are value for money aboard speedsters.

However, EYE CANDY has campaigning among optional claimers, twice beating $750,000 horses, making her attempt at overnight allowance runners almost a three-class leap past $1m claiming company and restricted stakes where old stager CAMPESINO and CRYPTOCURRENCY, respectively, have made their roosts.

CAMPESINO, who, up to January 4, was CRYPTOCURRENCY's stablemate at Philip Feanny's barn, continues to plug away at age 10, an ignominious task for the former grade-one Caribbean sprint champion, though he has earning his keep, earning $1m last year.

However, CAMPESINO's spunk has waned, especially on the round course. At age 10, he has running his best races at five furlongs straight, unable to navigate the bends as he did while in his prime. Against a light and fit CRYPTOCURRENCY, CAMPESINO should be outrun up the lane.

CRYPTOCURRENCY, as usual, remains a danger to herself, having a penchant to haul up in her races. However, Oneil Mullings seems to have developed an understanding with the four-year-old filly, allowing her to coast, for as long as possible, before asking her to run.

At 111lb, CRYPTOCURRENCY hasn't this light since beating PRINCE CHARLES at five and a half furlongs with Mullings aboard. Since then, she has improved, bar one bad race, which she quickly wrote off with a narrow loss to PRINCESS AVA, followed by a fine victory with 122lb, at six furlongs, in the December 7 Ron Ron Trophy.