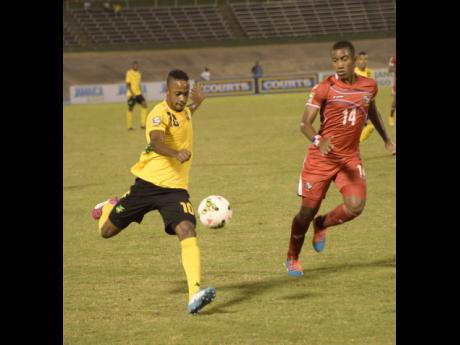 The restart of the 2020 United Soccer League championship season, has been fruitful for national striker Junior Flemmings.

The 24-year-old Phoenix Rising FC player has now scored six goals in the last five games since the resumption of the campaign in July, including a hattrick on Saturday as Phoenix Rising beat New Mexico United 5-2. Flemmings is one of the few national players that have been able to return to action fully in the United States with strict COVID-19 restrictions observed. He says that given his new playing environment, it is just a matter of following the guidelines to ensure safety.

"It's a life crisis, it's a world crisis," Flemmings told STAR Sports. "There is not much that we can do. We just have to follow the guidelines of the doctors and those in charge and keep on the right path and [follow] the protocols that have been put in place."

As part of conditions to facilitate the restart of the season, the 35 teams were grouped based on geography to operate in a World Cup-styled format. While some venues have allowed a limited number of fans to attend games, the recent spike in cases in Phoenix, Arizona has resulted in the team playing behind closed doors in its home stadium. However Flemmings hopes that the situation improves so that the the crowd support can return in some capacity.

"[Hopefully] within the next three [or] four weeks, [there] would be a step forward in getting a limited amount of fans in the stadium and that could certainly help in terms of our performance going forward," he said.

The former Tivoli Gardens player has intentions of being a part of the national team as the Reggae Boyz continue to make preparations for their final round World Cup qualifying campaign which begins next June. He acknowledges the potential challenges of the new format but says that he hopes that his continued form will allow him to contribute to the World Cup qualifying cause.

"We have a really interesting group of players," he said. "Its going to be challenging because everyone wants to represent their country on the global scene. You just have to make sure that you stay ready and when the opportunity presents itself you are there [to take it]."

Phoenix Rising are first in Group B and will face the San Diego Loyal, who features former UWI FC goalkeeper Amal Knight, this weekend.