Liverpool in crisis after 1-0 loss to Chelsea in EPL 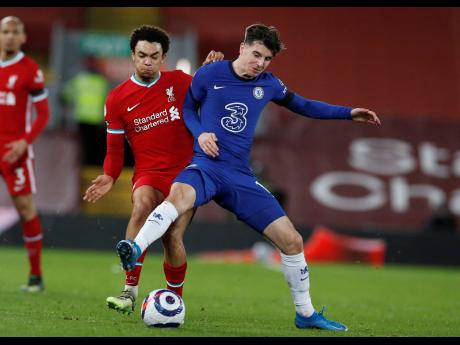 Chelsea’s Mason Mount (right) challenges for the ball with Liverpool’s Trent Alexander-Arnold during the English Premier League match between Liverpool and Chelsea at Anfield stadium in Liverpool, England, yesterday.

Liverpool's woeful home form is developing into a full-blown crisis after Chelsea's 1-0 victory yesterday inflicted a fifth straight league loss at Anfield on the Premier League champions - the worst run in the club's 128-year history.

With Liverpool's title defence already over, this was billed as a battle for a Champions League place and Mason Mount's 42nd-minute goal lifted Chelsea back into the top four.

Chelsea's previous win at Anfield, in 2014, effectively ended the title hopes of Brendan Rodgers' side. This one was a blow to Liverpool's chances of a top-four finish under Jurgen Klopp.

Klopp's side is four points adrift of Chelsea and with Everton and West Ham also ahead. Liverpool have now gone more than 10 hours without a goal from open play at Anfield.

The hosts failed to register an effort on target until the 85th minute and Georginio Wijnaldum's weak header was never going to beat Edouard Mendy.

They have taken one point from the last 21 on offer at home since Christmas and scored just two goals, one of which was a penalty.

None of Liverpool's established front three - Mohamed Salah, Sadio Mane or Roberto Firmino - impressed but the sight of Salah, the Premier League's leading scorer, being substituted just past the hour mark was baffling.

The Egypt international certainly thought so as he sat shaking his head, having been replaced by Alex Oxlade-Chamberlain.

Chelsea, by contrast, looked full of threat with Timo Werner - a player Liverpool were interested in but decided they could not afford last summer - a constant problem.

Despite one goal in his previous 17 league outings, he caused problems with his movement, drifting out to the left then popping into the middle to give Fabinho a real headache on his return to the side.

The Brazil midfielder, replacing Nat Phillips after he became the latest centre back to pick up an injury, was partnering Ozan Kabak in Liverpool's 15th different central-defensive starting partnership in 27 league matches.