Hosein hoping WI can break the 26-year jinx against Australia 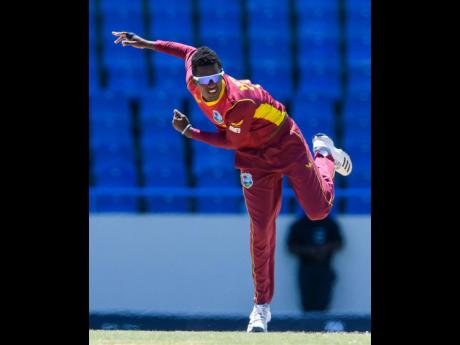 The West Indies could break a 26-year jinx today if they can come away with a win in the third and final One Day International against Australia at the Kensington Oval starting at 1:30 p.m. Jamaica time.

The home side has not won a bilateral ODI series against Australia since the Courtney Walsh-led team defeated them 4-1 back in the 1994-1995 home series.

With the series locked at 1-1l, the West Indies will be hoping that they can pull off another victory to claim a 2-1 win, this after they tied up the series on Saturday following a four-wicket win in Game Two.

Left-Arm spinner Akeal Hosein has been one of the main contributors to the team's recent success. His three wickets in Game Two helped to restrict the Aussies to 187, after which the home side made 191 for six in 38 overs.

For Hosein, the ODI series win would be another stellar moment for the Trinidadian rookie, following the team's recent T20 series win.

"There won't be a greater feeling for a youngster to come in and break the jinx of a record that has been eluding us for so long. It was something special when we defeated them in the T20 series, and it would be another special feeling to be in the team and help us across the line and do it for the region," said Hosein.

Hosein, who has claimed five wickets in the series so far, says he is hoping to remain focused in a bid to maximise his performance come today.

"Having a level head is important because I didn't have the best of starts to my T20 career, but I kept believing in myself and being positive throughout my training. I continue to put in the hard work, and it's about grabbing the opportunities, added Hosein.