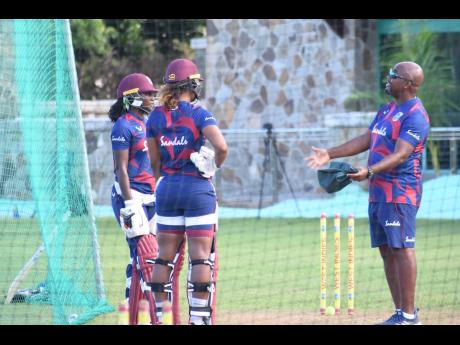 West Indies Women's assistant coach Robert Samuels says he will be ensuring that his team does not get ahead of themselves and try to remain consistent, as the side contest the one-day international series against Pakistan and then the ICC World Cup qualifiers later this month.

The regional women made a good start to the tour of Pakistan following a workmanlike victory in game one, and Samuels is hoping that the women will continue to show good form and put up consistent numbers to qualify for the global showpiece in New Zealand next March.

"We are trying to eliminate complacency and better our performance and score 250 plus runs every time we go out there. We are looking for more centuries from our top batters and top-class performances. Sometimes after a good performance, teams tend to drop their guard a little bit but we can't afford to do that," said Samuels.

Deandra Dottin has already shown good form following a career-best 132 in the opening match against Pakistan. Hayley Matthews has also found a new lease on life batting lower down the order, following her knock of 57 and three wickets with the ball.

Following the Pakistan series, the West Indies Women were set to bow into action against Papua New Guinea in their Group A fixture in the World Cup qualifiers on November 21, however, that fixture has changed with the PNG side having to pull out of the qualifiers due to a COVID-19 outbreak in their squad.

With fewer teams now in the qualifying group which features Sri Lanka, the Netherlands and Ireland, Samuels believes the team will have to be on their 'A' game to ensure that they get through to the Super six phase of the qualifiers.

"Once a team drops out it will have a big impact because you would be missing out on points and you would want those points. The more games you play, the better it is for you to qualify. So, fewer games mean that you have to be on your 'A' game every single time because you cannot afford any mistakes," Samuels said.