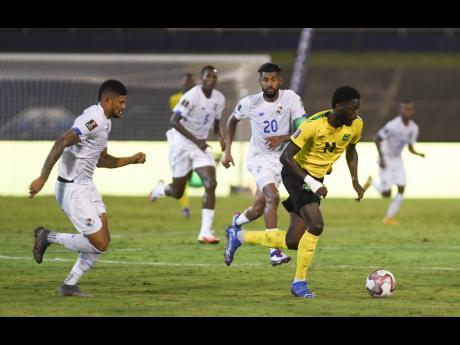 Reggae Boy Shamar Nicholson (right) in action against Panama during a FIFA World Cup qualifying match at the National Stadium on Sunday, September 5, 2021. 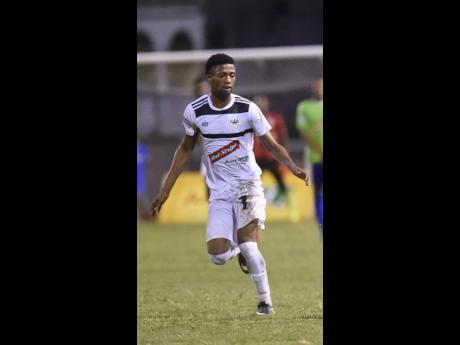 The national team will face the Mexicans on January 27 at the National Stadium, before travelling to Panama City three days later.

They then return to Kingston to face Costa Rica on February 2.

It is understood that Nicholas has turned down JFF's invitation because he says he needed more time to settle in at his new club Spartak Moscow in Russia, following his move from Belgian club Charleroi earlier this month.

Spartak Moscow are ninth in the Russian Premier League with 23 points from 18 games.

Nicholson, 24, last represented the Reggae Boyz in November against the United States and has scored 29 goals in 29 appearances.

It is also understood that midfielder Kaheem Parris, who plies his trade in Slovenia for FC Koper, has turned down the JFF's invitation to take part in Jamaica's international friendly match against Peru on January 20.

Parris, 22, is a former Dinthill Technical High School and Cavalier player, and has scored five goals in 14 appearances for Koper this season. He has made four appearances for the Reggae Boyz.

The Reggae Boyz are sixth of eight in qualifying, with seven points from eight matches.

The table is led by Canada, on 16 points, with the United States second on 15, while Mexico and Panama are third and fourth, respectively, with 14 points each. Costa Rica are just ahead of the Reggae Boyz on nine points.

The top three teams from Concacaf automatically qualify to the FIFA World Cup which takes place in Qatar in November, while the fourth-placed team goes into an intercontinental playoff tournament.