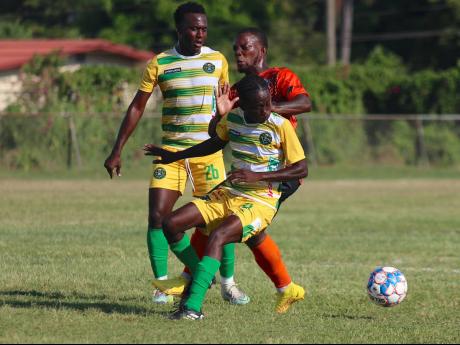 Tivoli Gardens’ Shaquille Jones is sandwiched by Vere United’s Shamar O’Connor (right) and Kayon Henry during their Jamaica Premier League opening match at the Wembly Centre of Excellence yesterday. The match ended in a 1-1 draw.

Vere kicked off the match at the Wembley Centre of Excellence with only 12 players at his disposal and was befuddled about the unusual circumstances.

"To be honest, you have to ask management because I am not sure what happened. The last bit of info I got was that I would have the full complement of players, but when I came for the game, I only had 12," said Dixon when quizzed.

STAR Sports understands that seven players who were named on the match card could not take part due to expired identification. It was further noted that some of the players were said to be in contract negotiations, which further complicated the issue.

Dixon and his 12 players, despite the foul-up, were able to carve out a point against the Jermaine Johnson-coached Tivoli Gardens.

It was unfathomable that from the outset that Vere's depleted squad marauded Tivoli's backline in the opening stanza.

Their constant pressure eventually bore fruit in the 13th minute when Ricardo Dennis jumped high inside the area to head home a right-sided corner from Tavis Grant.

Inexplicably, Vere took their foot off the gas for the remainder of the half, which allowed Tivoli to get back into the game with several telling attacks.

Vere, however, went into the halftime break with the lead, but on the resumption, Tivoli placed them under constant pressure, which put the tiring Vere defence under scrutiny.

Tivoli continued to press and introduced fresh legs through substitutions and were eventually rewarded when substitute Diego McKenzie turned his marker and rifled home a right-footed shot from inside the area in the 77th minute.

Tivoli had numerous chances to seal all three points but a valiant defensive effort from Vere ensured that it was honours even after the opening fixture of the new season.

"I must take my hats off to my team who showed character and fought hard and, hopefully, we can rectify the players' issues for the next game," said Dixon.

"I would say it is two points dropped. If we were more clinical in front of the goal we would have gotten three points, but there were a few nerves in the players in the first game, and a point we will take," Blake said.