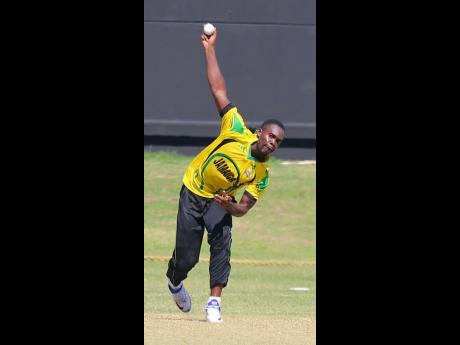 Jamaica Scorpions sealed their place in the final four of the Super50 Cup after a 23-run Duckworth-Lewis-Stern (DLS) method win over the West Indies Academy in their rain-affected day/night encounter at North Sound in Antigua.

The win pushed the Scorpions to the top of Group B with 16 points from their six matches. They will face Guyana Harpy Eagles in semi-final two.

Barbados Pride will kick off the semi-finals against Group A winners Trinidad and Tobago Red Force.

Scorpions secured their final group game win after dismissing the West Indies Academy for 175 in 39.4 overs, with off-spinner Jamie Merchant leading the way with three wickets for 35 runs from his 10 overs.

Pacer Nicholson Gordon was also in good form, as he picked up three wickets for 40 runs from four overs and four balls.

Off-spinner Peat Salmon played a supporting role by snaring two wickets for 33 runs for the Scorpions, who reached 125 for four in 26 overs and two balls when rain ended the contest for a second time.

Skipper Rovman Powell was not out on 26 from 25 balls, while Javelle Glenn was unbeaten on four runs from 11 deliveries.

Earlier, opener Brandon King continued his good showing with the bat by scoring 48 from 55 balls, before he was brilliantly caught and bowled by leg-spinner Kevin Wickham. King hit five fours in his knock.

Left-hander Alwyn Williams chipped in with 20 from 34 balls while Andre McCarthy made 14.