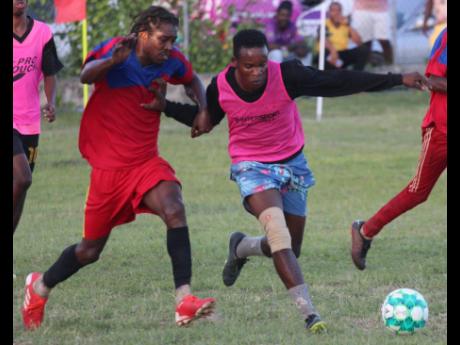 Kemar Golbourne of Treadways (left) tussles for possession with Akeel Buckley of March Pen ‘A’ during the final of the football competition of the SDC Four-In-One competition at the March Pen Community Centre recently.

Football frenzy erupted in the community of March Pen recently, as the Social Development Commission (SDC) Four-In-One competition wrapped up the parish finals for the greater St Catherine Division, while World Cup hits a high in the early stages.

Hosts March Pen 'A' signalled their intentions early by sealing the netball competition, with their footballers also showing they are in World Cup mode, as they defeated Treadways from Linstead 1-0 on penalties to secure the title.

Captain Tyrese Gowe scored the winning goal, with an aim to emulate his favourite team in the World Cup, Brazil.

"I am glad that my team was able to come away with the victory and secure this football title in front of the home support from March Pen. Brazil is our team and we would love it if they would also go on to win the World Cup," Gowe said.

Aaron Jones, manager of the Bog Walk football team, said they have mixed support when it comes to the World Cup, with some players liking Germany, Brazil and Argentina.

"Some of the players like Germany due to the tactical way how they play football while the Brazilian fans love the flair and the skill that they bring. For the Argentina supporters now, they are on their wagon mainly because of Messi," said James.

Nashae Lawerence, who represented March Pen in the netball competition, is throwing all her support behind the Cristiano Ronaldo-led Portugal.

"I am a big fan of Portugal and when the World Cup comes around, the community field is filled with people, as we bring out the big screen and run a big pot and just have a great time," Lawrence said.

The enthusiasm is pleasing to St Catherine SDC Parish Manager Samuel Heron, who was delighted that his entity was able to bring together over seven communities in a positive way.

"Football is a major catalyst as far as a sport that we use to engage communities and generally March Pen is a community space that many persons would say that they would not go to, but through sports and culture, we came together and had a safe and wonderful time," Heron said.

In the end, Bog walk will go on to represent the greater St Catherine division at the national finals after amassing 38 points, followed by a tie for second place between March Pen 'A' and Treadways with 28 points. March Pen B finished with 25 points followed by Ensom One with 16 points.

Over in the St Mary parish finals, Annotto Bay Elite will go on to represent the parish after chalking up 33 points, followed by Port Maria with 32 and Annotto Bay Good Vibes third with 28.