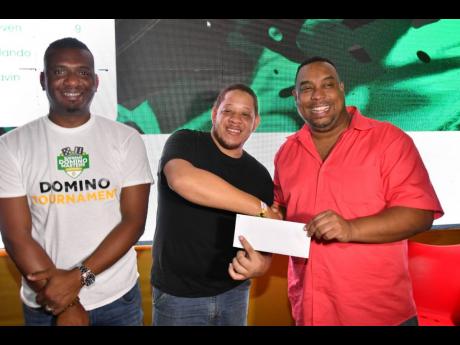 The Kingston Jerk Centre was jam-packed with domino enthusiasts on Sunday, as over 100 participants turned up to vie for over $150,000 in cash prizes, as title sponsors Supreme Ventures rolled out a one-day pilot domino tournament to kick-start the upcoming all-island masters competition.

Starting in March, the Supreme Domino Masters Tournament will make 17 islandwide stops to determine the best player in the country. Those events will culminate with three big national events at the National Arena in Kingston in September.

On Sunday, Gavin Simpson came out victorious in the 'cutthroat' format after getting by challengers Stephen Walker, Orlando Fraser and Steven Brown in the final to claim the $60,000 first prize.

Simpson, who hails from Montego Bay but is no stranger to Kingston, had to dig deep to secure the victory, as he had to come from behind to seal a four-way tie at nine-all, with the first player to 10 walking away with the bigger piece of the pie.

"I am always confident about a domino game. They had one of these tournaments similar to this in December, and I made it to the final as well, but to me, domino is like poker; sometimes you have to play your opponent more than the dominoes you draw," said Simpson.

The overwhelming response for the one-day tournament has Dwayne Tulloch, senior vice-president of retail and operations at Supreme Ventures, tizzy at the prospects of the nationwide event slated to pose off in a couple of months.

"I am very excited and encouraged about what is to come, because we are doing this to reach back out to our communities to bring back the old Jamaica, where we kick back on a Sunday evening and play some dominos and have a good time," Tulloch said.

The overall masters champion at the end of the tournament in September is set to walk away with $1.5 million in cash.