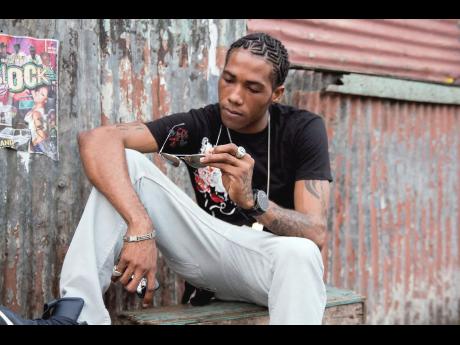 The song will be released on King Jammys Magic Moment compilation rhythm-driven album, set to be released in coming weeks.

According to Dwayno, he is excited to work with a dancehall stalwart.

"It brings me great pleasure to get the opportunity to work with a producer like Jammys, and I'm hoping for the best with this song," he said.

The artiste says he had

written the song before teaming up with King Jammys. However, the icon fell in love with the record and expressed that he wanted it to be apart of his compilation album.

"Heaven Gates is a song that is speaking about the feeling of using marijuana, and Jammys decided to put it on his compilation after hearing a demo. I hope this song will turn some head, and I will definitely be performing it during my upcoming tour, which starts this week," he said.

The artiste, who is set to make appearances in the US, will perform in places like Boston, Brooklyn, Philadelphia, New Jersey and Minnesota.

" It will be an awesome experience to perform for my fans and to see their response to Heaven Gates because I plan to use this tour as testing water for the song," he told THE