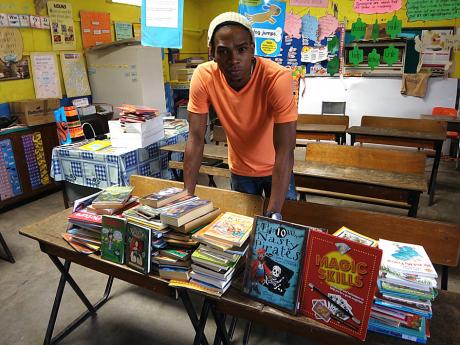 Fast-rising singer D'Yani is playing his part in helping to empower people from some of Jamaica's less fortunate communities through education.

In partnership with the 'Read Out Loud' campaign, the singer recently donated more than 2,000 books to schools and communities in Kingston, Clarendon and St Thomas.

The Read Out Loud campaign is a project of the Literary Genius Foundation, an organisation whose goal is to provide Jamaican children from underserved communities with skills they'll need to become successful readers and, ultimately, to have confidence as students and adults.

In partnership with D'Yani, books sourced from Worldbooks.com were donated to schools like the Rock River Primary in Clarendon, Hope Valley Experimental in Kingston, as well as Morant Bay High and Albion Prep in St Thomas.

"It was mentioned by Read Out Loud and I liked the idea," said the singer, who explained that the books were for persons between the ages of five and 16. "It is for persons, who don't have the resources to improve themselves. It is an ongoing venture to improve not only literacy, but to help people improve their overall function in society."

D'Yani, whose fledgling career has seen him find early success with songs like Give Away My Love and Sad Story, said there are other projects in the pipeline that will be made public soon.

Meanwhile, the singer is putting the final touches on his EP which is due out by the end of the year. There are also other musical developments in the pipeline. "Now, I'm focused on getting some videos done and getting the music out there," he said.