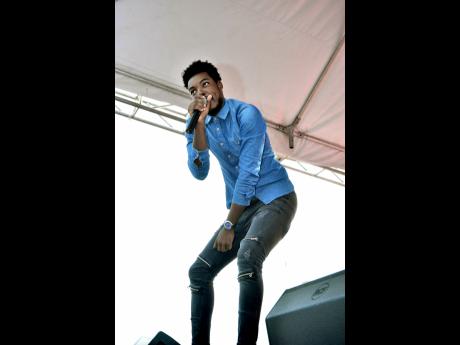 Rising dancehall artiste Devin Di Dakta is in high spirits after learning that he will be rubbing shoulders with international music's best.

Yesterday, it was revealed that Devin will be making the trip to Los Angeles on February 12 to attend the 59th Grammy Awards Ceremony inside the Staples Centre.

This follows his nomination for his work on Sly and Robbie Presents; Reggae for Her with JL.

Devin told THE STAR that right now is one of the happiest times in his life.

"Imagine when it finally reach? Mi work hard for it so my just a go enjoy it," said Devin when contacted yesterday.

"All the preparations mek already. Visa get already, suit and everything ready!" he added.

The young artiste plans to keep the style and make of the suit a red carpet surprise.

He said: "Cyaa unleash the suit yet! Just know seh is a 'bumshalaboom' suit!"

He also said that fans should stay tuned to his social media pages in the days leading up to his departure.

"Before me even reach on the plane I'm gonna be flooding Instagram," he said.

Devin is expected to leave for Los Angeles on Friday, February 10.

He told THE STAR that he plans to attend a Grammys pre-party on February 11 and the awards ceremony and its after-party on the following day.

'Sly & Robbie Presents ... Reggae for Her' by Devin Di Dakta and J.L. is now available for purchase on all online platforms.

This is not the first occasion that Sly and Robbie have worked with acts from talent competitions.

In 2011, Magnum Queen Nioma was featured on their 2012 album 'New Legend: Jamaica 50th Edition, which was nominated for Best Reggae Album at the 2013 Grammys.