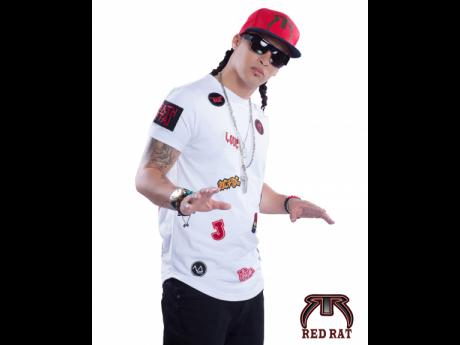 Any dancehall fan should be able to readily identify the trademark exclamation, "Oh noooo!"

Though he may have dipped out of the limelight for a number of reasons, Red Rat has never stopped doing music.

"I'm up to the time with what's going on. Every riddim that comes out, any riddim yuh call, I voice myself on it, even if I don't put it out or link the producer. I never stopped. Music inna mi blood," Red Rat told The WEEKEND STAR.

"It was basically a parody of all my songs into one song. He wanted my approval. But I said, 'this bad, I'll jump on it!' Chippy was excited," he said.

"Most people have been telling me they weren't expecting my verse to be so 'fire'. They were expecting me to have an old sound. But I'm not a kid anymore. I got the break when I was a teenager. Obviously, 20 years later, I'm not a kid," he said. "[But] what bugs me is people thinking I'm an old artiste."

As a youngster, Red Rat caught the attention of Danny Browne, CEO of Main Street Records.

Signed at 16, Red Rat began his career working alongside the likes of Buccaneer, Lady G, Papa San and Degree, who gave him the name.

After graduating from high school, Red Rat released a string of hits, including Shelly-Ann, Dwayne and Tight Up Skirt, showcasing his unmistakable voice and unforgettable exclamation.

"I took myself away from the industry in Jamaica because when they started the whole 'choose-a-side', I saw no need to jump into that system. Nobody sound like me. I was bussin' my own style, so I took myself out of that," he said.

Additionally, Red Rat's father, Wallace Wilson Sr (formerly a guitarist with Byron Lee & the Dragonaires), passed away, causing the dancehall star to take a break. But that didn't last long.

"Ever since the break, because of how well-known I was globally, I never stopped putting out records," he reiterated.

In 2016, Red Rat collaborated with DJ Buddha on a track called Higher, which currently clocks in at more than 20 million streams on Spotify.

These days, Red Rat sits at the helm of Mogul Movements Worldwide alongside musical partner Pascalli.

"We met about 10 years ago. We were just vibing off each other. She's a phenomenal artiste who thinks out of the box. She's not doing what everyone is doing," he explained.

Mogul Movements has a writing and production team working in multiple genres, including hip hop, trap and Spanish pop.

As Pascalli's project wraps up (due to drop early 2019), Red Rat is preparing for his own.

"The way I go about it, the level is always up there. I pride myself in making sure the content is up to standard. I have 10 or 11 good songs. It's one of the baddest dancehall albums I've heard in a long time. I'm looking for some Grammys. I'm gonna throw that in there and let God do what He's gonna do. I need a Grammy," he said.