Late rapper wanted track to be ‘for the culture’ 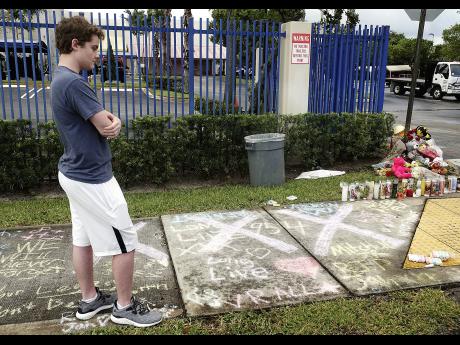 A fan of rap singer XXXTentacion pauses by a memorial for the rapper.

Before his untimely death in June last year, US rapper XXXTentacion revealed plans to release a song with incarcerated deejay Vybz Kartel.

The rapper, who was of Jamaican parentage, seemed excited about the track, but before it could hit the airwaves, he was murdered.

Delivering on the project, the audio, which also featured Ky-Mani Marley and Stefflon Don, was made public a few months ago.

The song, Royalty, already garnered much attention via streaming and the video was released last Wednesday.

The song has occupied a top three spot on the local YouTube trending list since. Currently at number two on the list, the song has racked up close to five million views.

In an interview with The Gleaner in July, the song’s producer, JonFX, said the track was something XXXTentacion wanted to do for the culture and it seems the video lines up with the late rapper’s vision. The video was directed by Damian Fyffe and was shot in Kingston.

With moves choreographed by Blacka Di Danca, the visuals showcase the vibrancy of Jamaica’s dancehall.

Blacka told THE STAR that he understood the ‘For the culture’ wish and executed to the best of his ability.

“From the get-go, it was always about the culture. The director is Jamaican too so he was just happy to fly everybody in to shoot in Jamaica to put together this whole set that he’s been working on for so long. I was told they wanted some military soldier moves. We got training from an ex-soldier and so everything in the video from the dancers are all authentic,” he said.

“This is one of the biggest music videos I’ve worked on all year. You have Triple X, Vybz Kartel, Stefflon Don, Ky-Mani Marley on one track and they’re all on top of their game,” he said. “I was on the Gaza and it was fun. The experience was amazing and it was just such a blessing to showcase Jamaican culture, dancehall culture on a mainstream level. Five million views is a blessing and I’m grateful.”